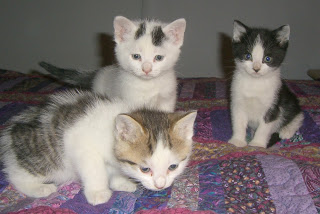 How quickly things can happen in fostering.  I took 3 cats up to Petsmart Saturday morning for adoptions and brought 7 home.  A lady brought these 3 kittens in to us that she had been bottle feeding for 2 weeks, ever since their mother got hit by a car and died.  The kittens were so adorable (is there a kitten that isn't?) and, since they weren't black or gray, I quickly volunteered to take them.  They're bigger than the 4-week-old kittens, so are probably about 5 to 5 1/2 weeks old.  No names yet, just Light, Medium, and Dark. 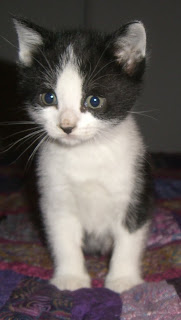 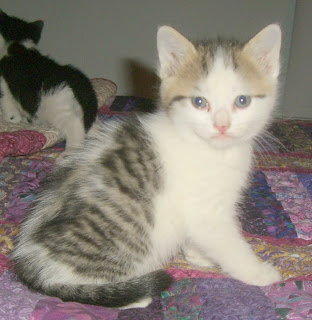 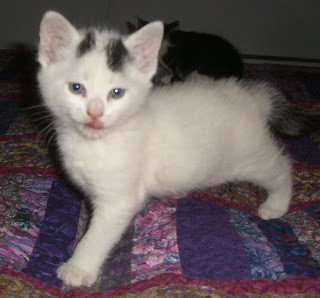 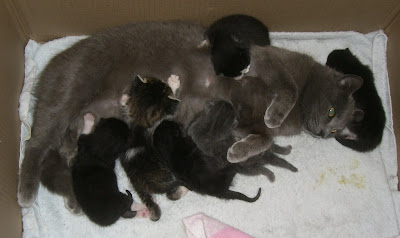 Then, a couple hours later, a construction worker brought in a male kitten about 2 weeks old that he found on a site.  He heard a noise and discovered one kitten under some debris.  Nobody had seen any adult cat, so he brought it to us.  Since I had two nursing moms at home, I got the baby in hopes he'd be accepted by one of them.  I took him in Kylie's room and held him so she could sniff him.  She didn't seem to want any part of him and started a low growl.  I took him into Amy's room and she accepted him immediately.  He was very hungry, too.  He's second from the left with his white foot highest on mama.  Amy's babies are 10 days old and their eyes are starting to open.  The new baby is bigger with eyes wide open, so I estimate he's 2 to 3 weeks old.  He's pretty adorable, too. 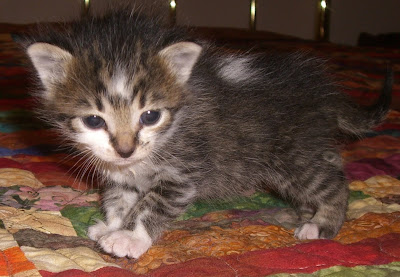