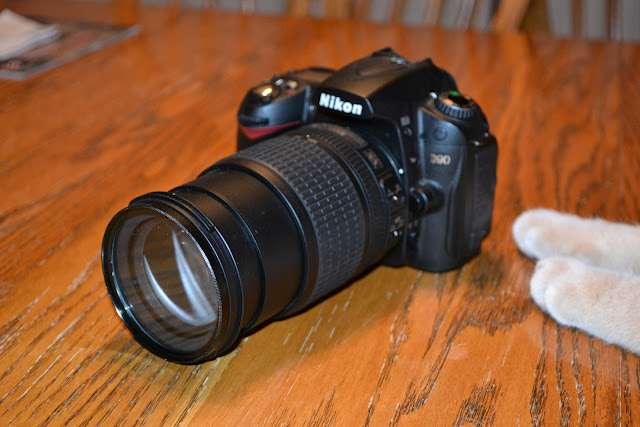 One of the reasons I haven't been posting for a while is lack of a camera.  John had graciously let me use his "good" Nikon camera for my blog photos.  My little red camera didn't have a very good flash.  The Nikon worked well, but I still thought the flash was uneven in the pictures.


Anyway, one morning I came into the kitchen and found the camera on the floor  It had been on the counter behind the TV the night before.  The flash attachment was no longer attached, and was laying about 8" away.  I'm sure it fell to the floor all by itself and no cat was involved in any way.  My heart almost stopped.  Crap!  John's going to kill me!  I noticed right away when I tried to put the flash back on the camera, that the metal bracket on the camera that the flash slides into was broken off and still on the flash.  And there was a copper strip with motherboard and circuit stuff on it that was hanging out and had puncture marks suspiciously like feline canines.  And two wires were also hanging out.  It didn't look good at all. 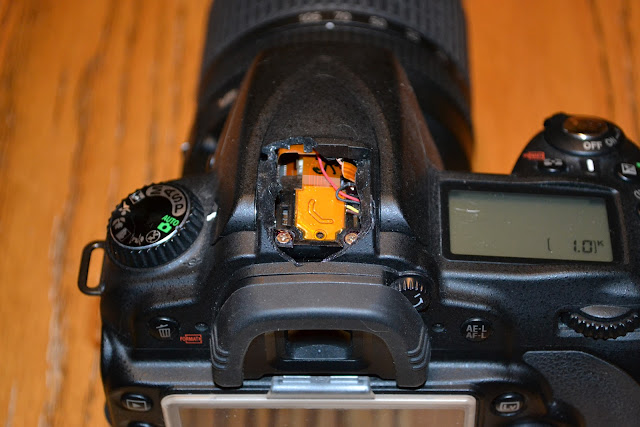 The circuit board copper strip was covering the orange square and the wires were attached to something, and the flash attachment bracket was covering that big gaping hole.  I called a local camera store and found out they don't do any in-house repair.  It would be 5-6 weeks to send it to Nikon to be fixed.  Next I found a place 15 miles away that DID have an in-house repairman, and he said bring it over.  When I showed it to him, he said Nikon stopped selling parts to unauthorized repair shops two months ago, and he would also have to send it in, and the cost would be at least $350.  Crap.  I didn't know how much the camera cost 6 or so years ago, or if we could get a better one now for $350.

For two weeks I debated about how to tell John.  Finally, one night, after he had eaten (never break bad new on an empty stomach), I just told him.  I'm sorry.  It was my fault.  I should have put the camera away.  He took it a lot better than I thought.  A week later a box appeared on the front porch.  And just like magic, we had a new camera.  Smaller, lighter, and takes great pictures.  The first thing John did was take the strap off so it wouldn't look like a cat toy.  Sorry, I can't show you a picture of the new camera, but it looks just like the old one, only smaller. 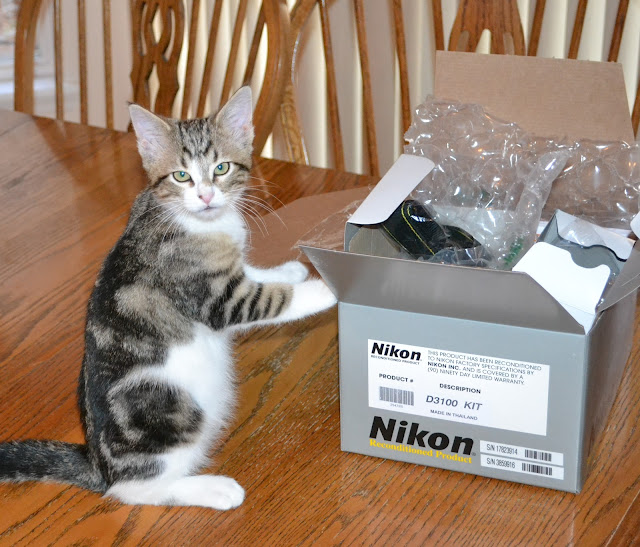 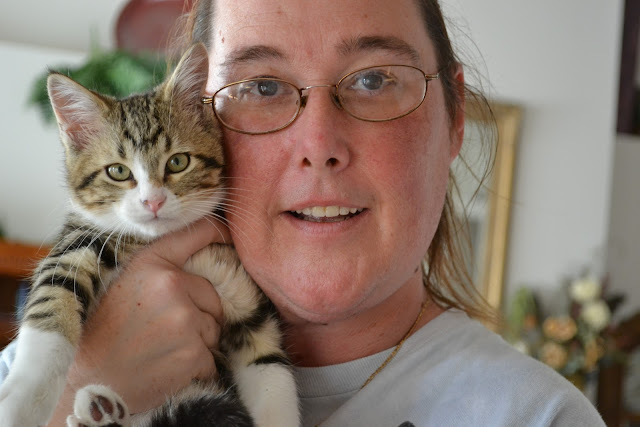 Ronan is my youngest kitten.  Last Sunday he was adopted out to a very nice lady, Trish.  I know Ronan is going to be loved and spoiled.  Obviously, there's something wrong with the new camera that cut the top of Trish's head off, but isn't Ronan just as cute as he can be?

A couple months ago, a lady, Tonya, adopted Kimmy, a black and white kitten of mine.  She sent this picture to me last week.  Kimmy was helping her put up some Christmas lights.  I do raise very helpful cats.  Thinking quickly, Tonya snapped the picture with her cell phone.  Isn't this a beautiful photo of a beautiful little girl.  Thank you, Tonya, for the photo and for giving one of my babies a good home. 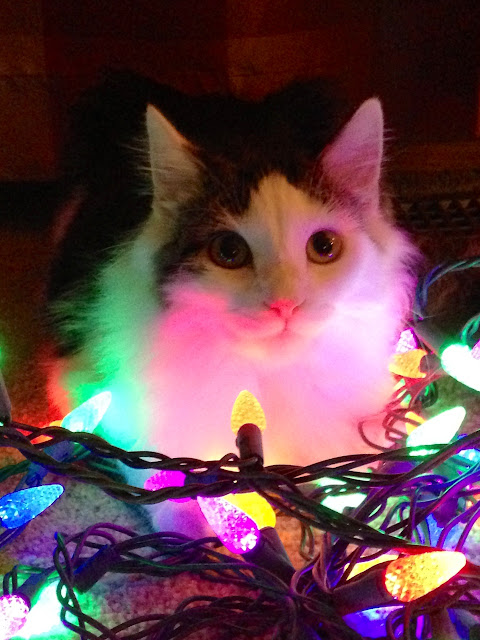 I haven't posted for a long time.  Partly because I was busy, partly because I do my blogging in the evening and stay up way to late doing it, and partly because a cat ate John's camera.  That's the next blog.
Posted by Barb's Cats and Quilts at 11:30 PM 4 comments: