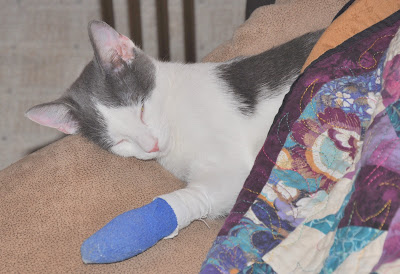 The gray basket baby, Wicker, got adopted very quickly, but for some reason, Cane and Reed are still at my house.  Wish I could be sorry about that, but they're the sweetest little guys.  They follow me around and are always on us when we watch TV.  A few weeks ago, I turned to take a tiny step and Cane stuck his paw under my foot so quickly, there was nothing I could do.  That's my story and I'm sticking to it.  I accidentally stepped on his paw and broke/dislocated a toe.  Poor little guy.  He was limping so pitifully.  I took him to the vet, and she put a splint on his paw and a cool blue bandage.  In no time, he was batting pom-pom balls on the hardwood floor with his splint.  When another cat would come to take it away, Cane would bop him on the head with his new weapon.  John called him Gimpy.  You could tell when he was around the kitchen, because he would tap-tap-tap as he walked.  Neither the splint not the broken toe kept him from doing anything he did before.  He still jumped up on things and then jumped down from them.  After his second x-ray, I was able to take the splint off today after three weeks.  Kittens heal very quickly.

I just got my new Kindle 3 a couple weeks ago and have been reading when I should be doing other things.  It's a big improvement over the K2.  The other night I was reading on the bed, and found myself with lots of company.  I used my cell phone to call John in the family room to bring the camera.  These are four of my six youngest fosters.  Two littlest kittens are in the nursery  - a large walk-in-closet in this bedroom..  From the left are Reed, then Lucy the dog, Cane, leaning against Lucy, Maizy, and Ebony. I've had Maizy a couple weeks and she has a new home already.  The day I took Maizy in to get her spay package, the vet's daughter's teacher called her to see if she knew of a long-haired kitten to adopt.  As a matter of fact.....   So, Marcy, the vet, called me to see if Maizy was up for adoption.  The teacher's mom is adopting little Maizy after Thanksgiving, so I get to play with her a little longer. 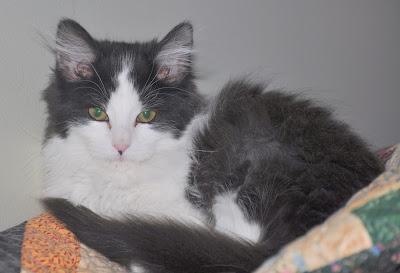 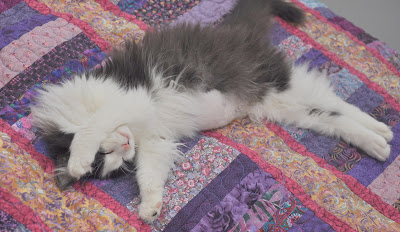 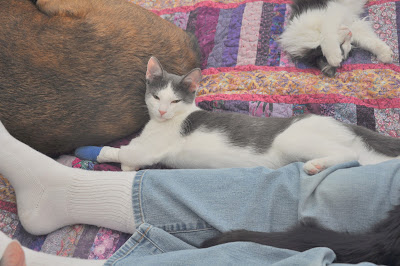 Cane was sleeping with his head resting against Lucy's back.
Posted by Barb's Cats and Quilts at 11:58 PM