A week ago last Saturday I took a pregnant cat that was found on a lady's porch.  She took the cat in and kept it for a few days until she could bring it in to us at Petsmart.  Her little girl named the cat Sprinkles.  I had agreed to take it, go through the birth, and keep mom and kittens until they were older and could go to another foster mom's house.  An x-ray last Wednesday showed six kittens would probably be born in a week or so.  Sprinkles had her six kittens Saturday night.  The first one was born at 8:30, the last one at 12:30.  Everything went like clockwork.  The only problem was sitting hunched over the birthing box holding a flashlight on Sprinkles.  I saw each kitten being born.

The only time I had to step in was when Sprinkles was licking and cleaning #2, pictured below, and ignoring #3 who had come out a very long 30 seconds before.  I gently took #2 away to a separate box and guided Sprinkle's head back to see #3.  She then began to lick the new arrival.  The red mass is the placenta that's attached to #2 by the umbilical cord.  I couldn't take #2 away until mom bit through the cord.  As gross as it sounds, mom eats the placenta and other little blobs of things of each birth.  In the wild, they're getting rid of all traces of their young to protect them from other animals, and it's also a good source of protein that the moms need during and after birth. 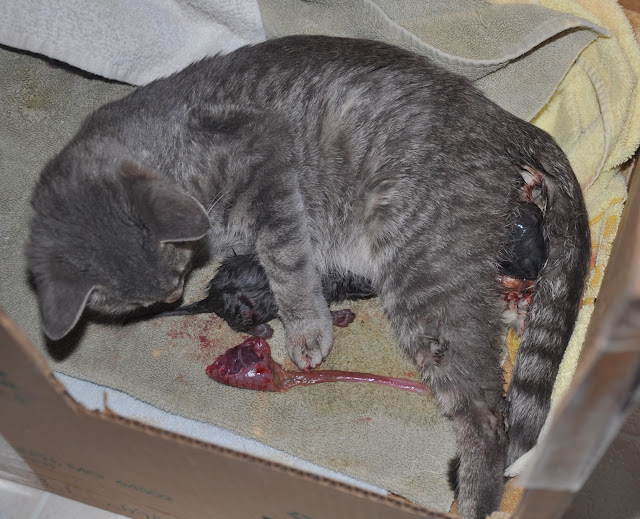 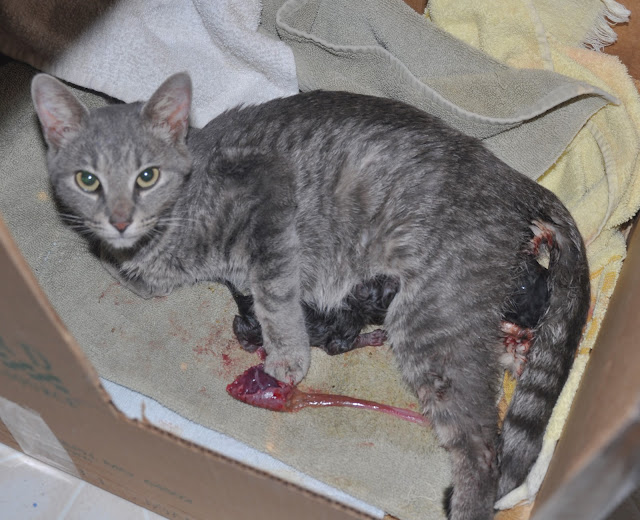 Here Sprinkles is cleaning #3.  Not with 10 years of yoga could I, or anyone I know, get into that position, but Sprinkles was like this a good part of the evening. 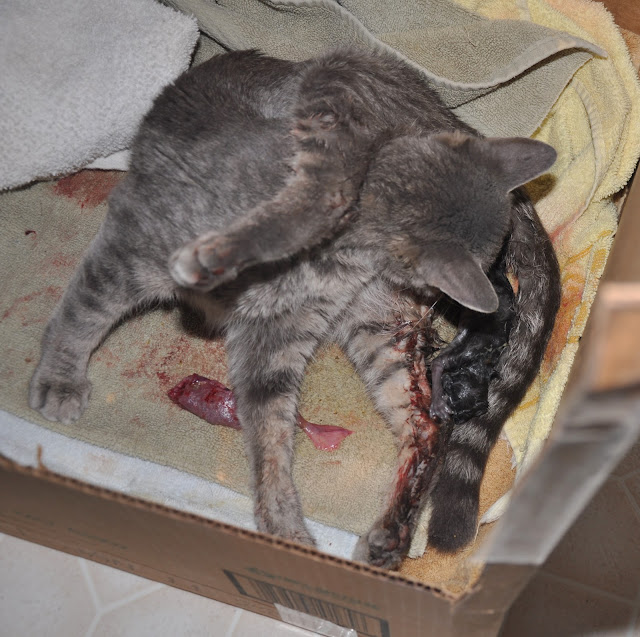 After #6 was born and cleaned, I put all the kittens in the other box, lifted Sprinkles out in the top towel, took all the towels out of the birthing box and replaced them with clean ones.  As soon as I put the first kitten back in the clean box, Sprinkles jumped back in and layed down.  All the kittens immediately began searching for just the right nipple.  There are three darker solid gray and three lighter gray tabbies.  Today, they're three days old and all doing well.  Mom was very thin after all the babies were out and wasn't producing much milk.  I helped Sprinkles out by bottle feeding them a few times a day, but the thing that helped most was giving her about 8 of the small cans of kitten food every day, as well as a bowl of grain-free dry food.  She's now feeding all her kittens on her own and still inhaling food.  Isn't she beautiful?  She's very small - only 5.5 pounds - the size of a normal 6 month old kitten, but the vet said she was about a year and a half.  All will be available for adoption in a couple of months. 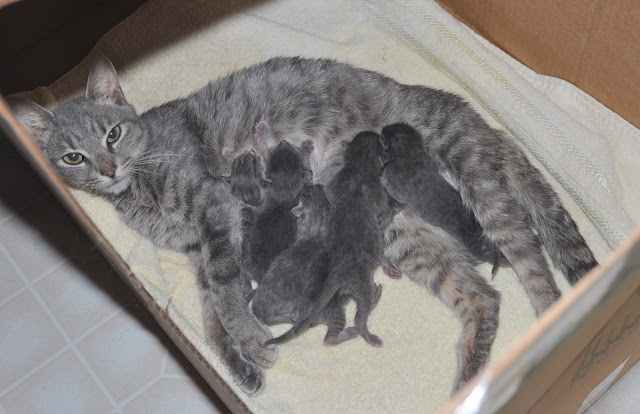