After scooping litter boxes for twenty-some years, I think I've finally hit on a system that works for me and the cats.  I usually have anywhere from four to nine active litter boxes to scoop two to four times a day. 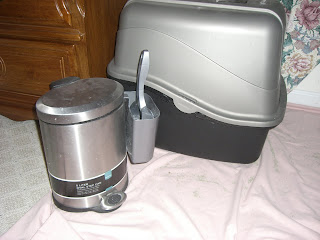 I found small aluminum step cans at Target.  They have a pullout plastic container with a metal handle.  The lid didn't open far enough to easily pull the container out, so my husband  cut the notch larger with a carpet knife and it's perfect.  I use the Glad small trash bags as a liner.  Target also has the Rubbermaid scoop and holder that hangs on the side of the can, for $3.65, and is wonderful. The can's a bit pricey at $20, but well worth it to me.  I have five of them - one in each box location. 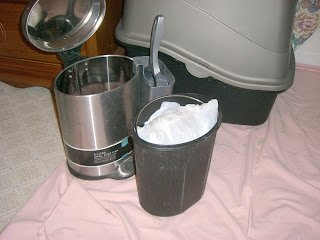 I lift the container with the trash bag out of the can, scoop the poop, fold the top of the trash bag over to keep the smell in, and put it back in the can.  The closed lid really keeps the odors at a minimum.  The container also gives me a hard edge to hit to get stuff off the scooper.  Hubby also disabled the step lever because I wanted the lid to stay open while I'm using it. I put sheets under all the boxes to catch the litter from little feet.  Rugs are just too small and sheets fit in the washer better.  I've tried white plastic shower curtain liners, but they don't wipe off as well as I thought they would.  Wet litter just make gray smudges.  Walmart didn't have the heavier clear ones when I was there.  They might work okay.  Sometimes the sheets will last a week or two, and sometimes it's just a few days before someone doesn't make the box.

When the bag is full, I hold it by the top, spin the bag till all the excess top is twisted, make a loop and tie a knot.  The bags are pretty strong, but they will pop open when tossed into the garage because it's winter and you don't have shoes on.  Not a fun clean up job.

My favorite covered litter box is one from Petsmart.  It's a nondescrip two-tone taupe color.  The inside of the pan is very slick and stuff doesn't stick to it like with other boxes.  I have several boxes in the garage that stuff sticks to like concrete, and I won't use them. 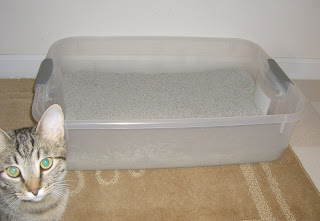 I also use Sterilite tubs, about 7" tall for litter boxes.  They're larger than regular boxes and the the cats seem to like them better, too.  In the two rooms I have one of each type of box, the uncovered Sterilite boxes get the most use.  Because the cats can flick the litter out, I use a rug or sheet under the boxes.  Some boxes have more angles and grooves than others.  The smoother ones are easier to scoop and clean. Toby approves. 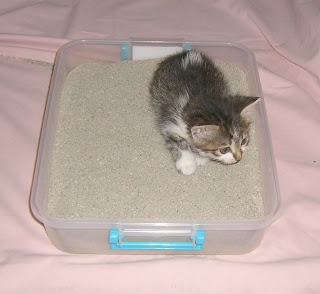 I've also discovered Sterilite boxes for the babies.  They're 15 x 11.5 x 3.25 and are 6.2 qts.  Got four of them at Walmart in April, '10.  When they graduate to a regular box, I put the lid on these, and they become steps for the little ones to climb into the regular boxes.  It works great.  Colby also approves. 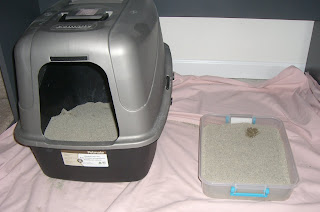