Today's photo hunt word is Gather.  Sandy used to own the Whistle Stop Cafe, as in Fried Green Tomatoes, http://whistlestopphotohunt.blogspot.com/.  Each week she posts a word on her website and bloggers can post a picture to theirs that depicts the word.  Since I couldn't decide between the two photos, I picked both.  The first one is Minnie's five kittens from last summer.  This is, so far, the most beautiful litter of kittens I've had in the four years I've been fostering.  I wanted to adopt all of them myself.

The second picture is three different groups of cats/kittens.  Around here, if you want to eat, you share the bowl or plate.

Happy New Year to everyone.

I've found a website called the Saturday Photo Hunt.  It gives a particular word each Saturday, and people post a photo on their blog to represent that word.  The word for today is JOY, and this is my photo.  The kittens are from the same litter and were born at my house in August, 2011.  They're four weeks old here, but the adult, Bridgette, is not their mom, Delcy.  Delcy came to my house as a pregnant cat, and the only space I had available was in a room with Bridgette.  They quickly bonded and she became Aunt Bridgette after the kittens were born.  Bridgette really does smile in her photos.  Truly a joyful moment for all.

There's nothing unusual about the cats playing, it's who's playing.  Bridgette!  She was rescued from behind a grocery store eating out of a dumpster and spent months hiding under a bed.  One day she escaped from the room when I went in or out, and didn't hiss or growl at anyone loose in the house.  She was allowed to stay out, but never bonded with anyone except Delcy, her kittens, and other kittens in the same room.  Today, she actually PLAYED with the other cats. 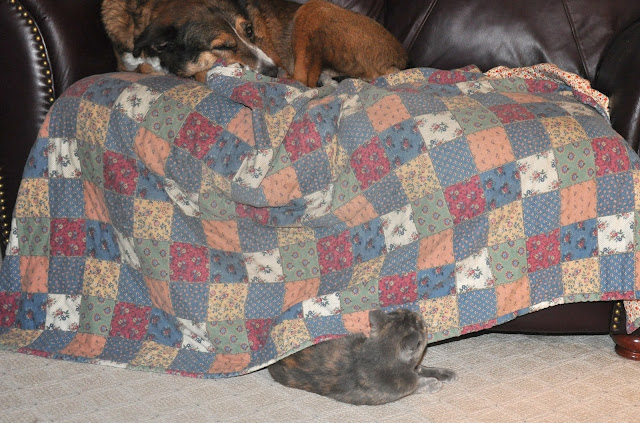 Bridgette was laying under the quilt Lucy lays on. 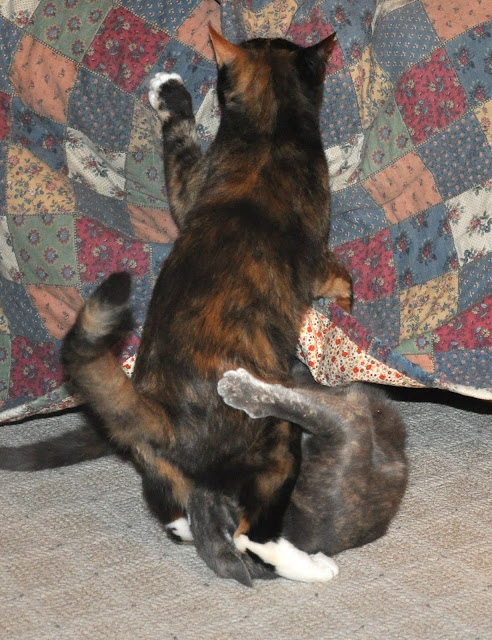 Meg came over and Bridgette grabbed her. 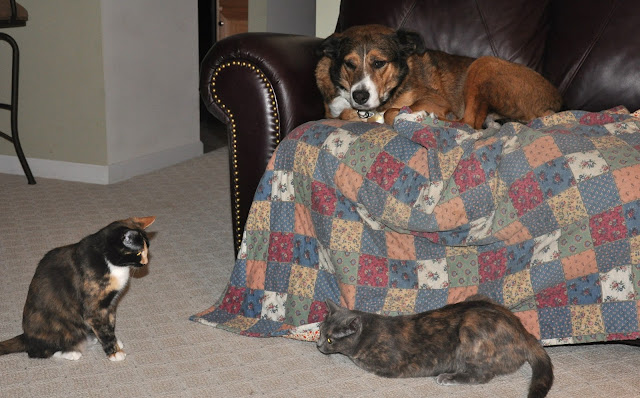 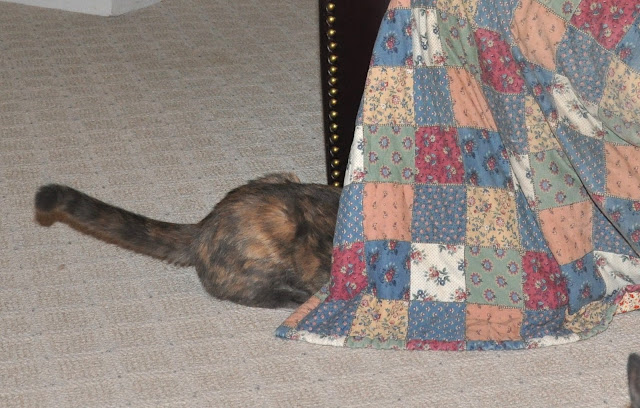 Bridgette went behind the quilt. 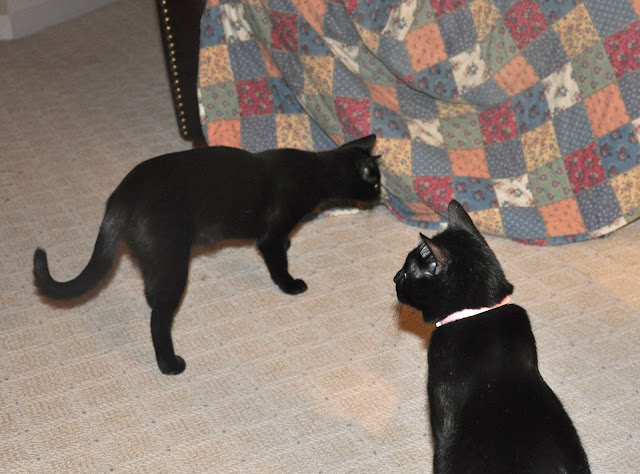 Delcy, her buddy, and Ebony came to see. 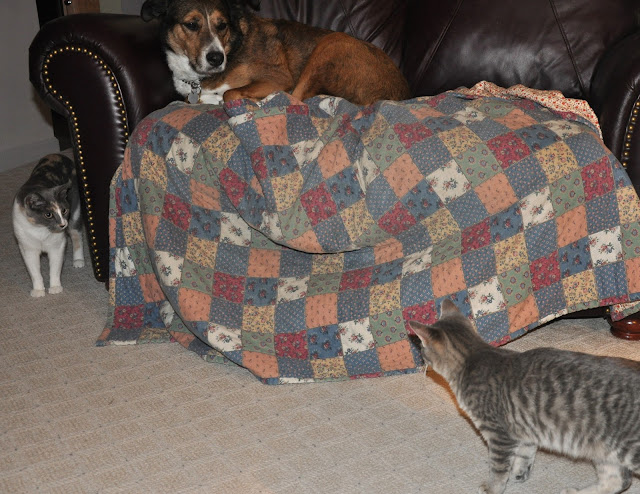 Then Xena and Micky came.

Micky and Cary checked things out. Bridgette's foot is barely sticking out of the quilt. 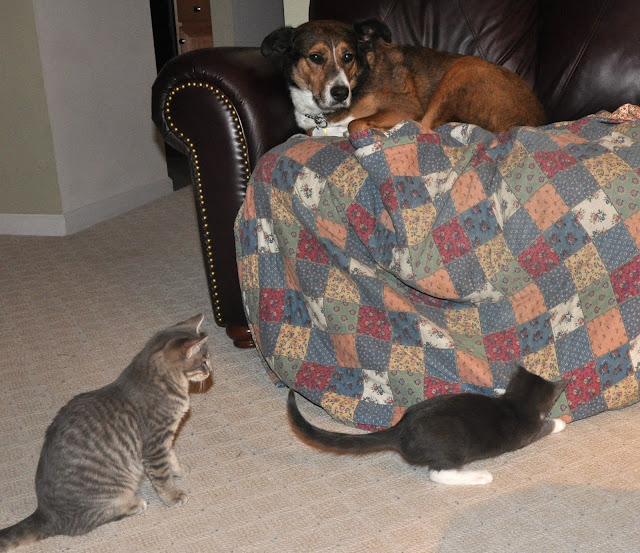 Cary says, "I know she's under there!" 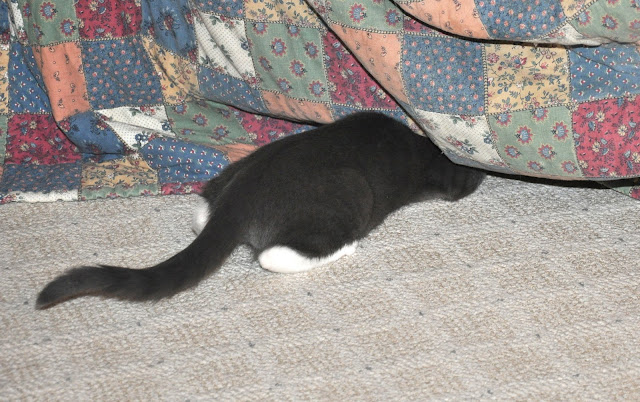 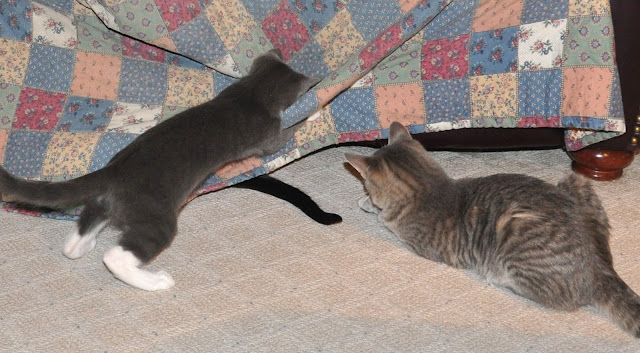 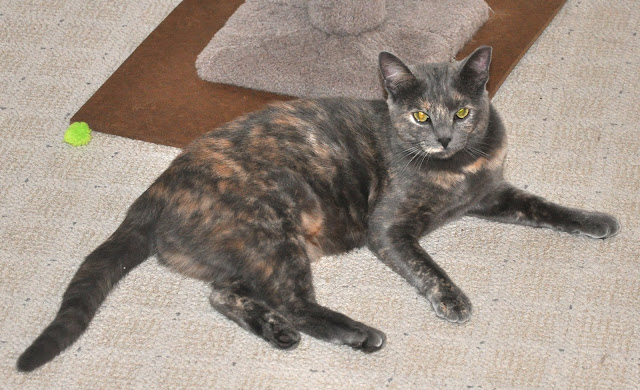 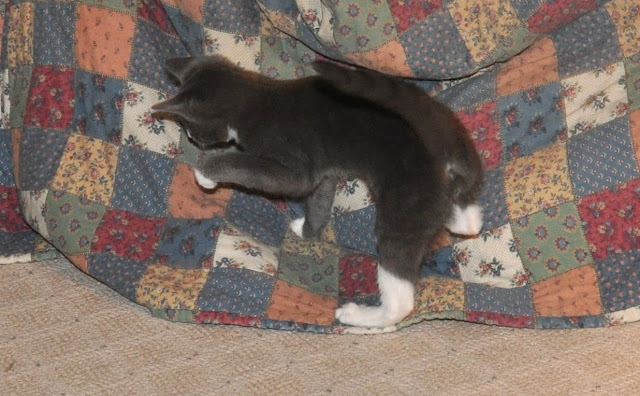 After that, Bridgette ran out from the other end of the quilt and rested by a scratching post.  But, Cary didn't see her.

The cats have been unusually playful the last few days when we've had gloomy days and on-off rain and drizzle.  I walked in on mom, Delcy, the black cat, wresting with her son, Cary, in the living room.  Mom was teaching her son how to protect himself if he ever got in a real fight.  All part of cat training and passing on the wisdom of millenia.  Here is some of Mom's Sage Advice.

Wednesday I went with my Wed friends to the St. Louis Art Museum to see the Monet exhibit.  It was okay, but I'm much more impressed by artists who paint realistic pictures than impressionists.  I feel it takes much more skill and talent to paint a face that really looks like a face than to combine pretty colors on a canvas.  Just my opinion.  We had lunch in the Central West End, a revitalized, trendy older section with lots of restaurants and antique shops.  Ate at Dressler's Restaurant and had a fantastic cheeseburger with onion jelly/jam.  I printed out about 8 recipes from various cooking sites and will be making some next week.  It's like caramelized onions in a sauce.  Awesome! 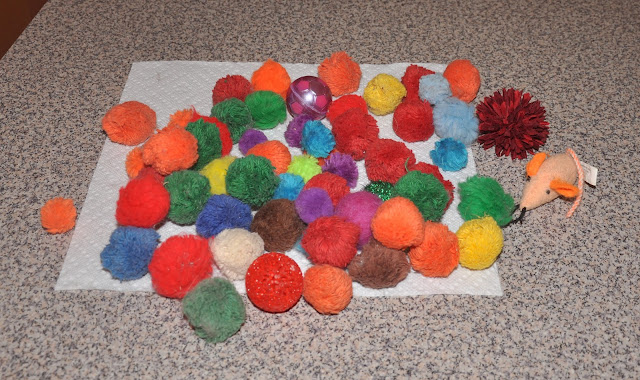 While I was gone, the cleaning fairies came.  They obviously cleaned under the oven and fridge because this greeted me when I got home.  There were 58 pompom balls, one silk flower and one mouse.


I threw a couple handfuls on the floor and after one cat found them, the others sensed fun and came running.  Many are back under the oven.  The rest are scattered throughout the house.


Later, I was folding laundry and Cary thought it was a wonderful place to play.  Several of the gang love to play with my socks.  John wears the same brand of sock in a larger size, but they only like my socks.  They take them out of the dirty clothes basket and from next to my bed.  Buster is the main culprit.  Some days I'll find 5 or 6 of my socks littered all over the house.  He probably had a great time doing it.  I guess I have stinkier feet than John.


Lucy wanted in on the fun.  Cary had just smacked her on the nose.
Posted by Barb's Cats and Quilts at 10:27 PM 1 comment: