Happy Mother's Day a couple days late to all you moms - of human and furry babies.  My daughter sent me a card with a picture of an acorn falling from a tree.  It says, "They say the nut doesn't fall far from the tree - and that scares the hell out of me."  She's such a sweet child.  She and Jason live 6 hours away in Chicago.  They love it there, but I wish we'd see them more often. 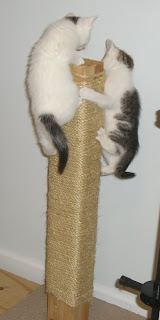 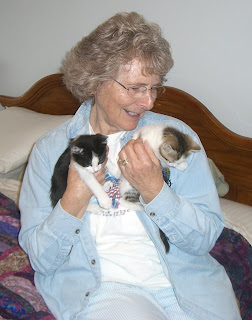 My dear friend, Madeline, is adopting Medium and Dark from the litter of three orphans.  They are now Jack and Jill and are a riot to watch play.  She's so excited and doesn't know how she'll make it another three weeks till they're ready to go home.  I'm glad she got to see and play with them now. 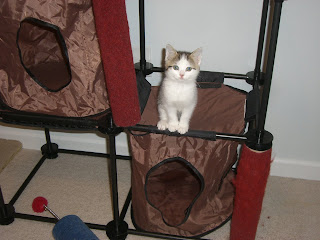 Light and Jack scaling new heights.  They're performing for their new mom, Madeline, and are so proud of themselves. This is Jack on a cat gym.  Doesn't he look like he just conquered Mt. Everest? 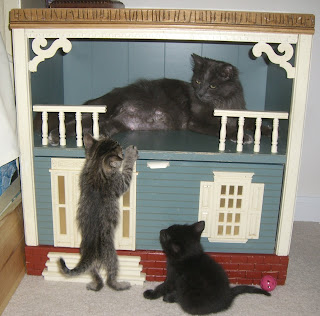 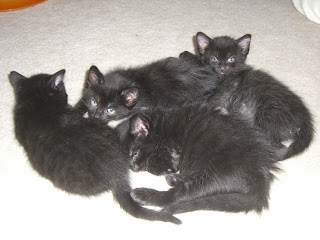 Mama Kylie's babies are getting so big.  They eat canned and dry now, but still like to nurse, too.  Kylie's found a safe place in the nightstand to get away from them for now.  Can't you hear the babies whining, "Mom, what are you doing up there.  We're going to starve!"  As you can see by the bulge of his belly, they're not starving.  I have to use the window screen every time I go in or come out of the bedroom.  They all run at me as a mob to try to escape.  They know there's a whole 'nother world and more cats to play with on the other side of the door. But, until they're tested, they have to stay in their room.  Mom's still hissy with the dog, so she won't be out any time, soon.

Although black kittens show up very well against beige carpeting, it's still just a pile of dark fur most of the time.  This is four of the six kittens.  The one I'm holding gives you a better idea of their size, now, at 7 weeks. 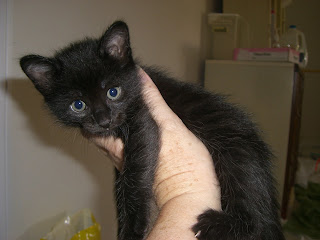 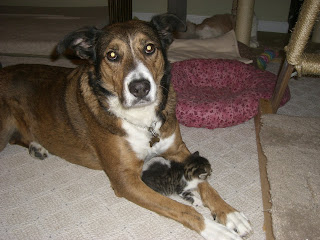 This is Colby, the construction site baby.  He's the funniest thing and keeps me smiling every time I see him.  He only weighs a couple ounces more than the litter I put him in with when I got him, but he's 2-3 weeks older than they are.  He's running around, flitting here and there, since he climbs in and out of the birthing box at will, and uses his little litter box.  He pounces on the younger kittens and wants to play with them, but they're only 3 weeks old and are just now walking wobbly.  He's my little mini-kitten.  Every time I see him I have to keep saying in my head, "You can't keep them all, you can't keep them all..."

My dog, Lucy, loves the kittens and thinks they're her own.  Yes, I posed Colby, but Lucy was thrilled to have a baby, if only for a few seconds before he explored a new room.  Colby tested negative for Felv and FIV the day I got him, so he occasionally gets paroled for a while.  We don't usually test them so young, but he had to go into a room with other small kittens and their nursing mom.  Mama Amy had tested negative, so the babies are probably negative, so we needed to know about him.  Getting a false positive in a kitten so young is a problem because you still don't know for sure, but getting a negative on Colby was wonderful. 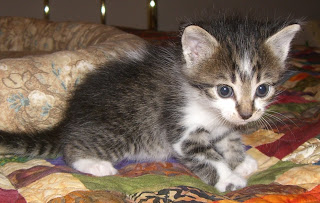 My little mini-kitten, Colby, at about 5 weeks.  He's so tiny for his age, but it makes him that much cuter.