Elsa Has Her Kittens

Just when I thought Elsa would be pregnant forever, her water broke about 10 minutes after I got home from my mom's house this afternoon.  She was waiting for me in her birthing box, something she's never done without me coaxing her in it.  After that, things progressed at a rapid pace.  I got home about 4:30, and the first kitten was born at 4:51pm.  There's usually somewhere between 15 and 40 minutes between births, with longer periods for the later ones.  However, once Elsa got started, she was popping those babies out one after the other.  The first five were all born in less than an hour!  No. 6 took 28 minutes, #7 took 48 minutes, and #8 was an excruciating 1.5 hours later at 8:22.  He was a little smaller than the others, but only by .25 of an ounce.

Eight kittens in 3.5 hours has to be a record.  I don't know if it makes any difference, but I talk softly and slowly to my pregnant cats almost during the whole birthing process.  I tell them they're doing so well, just a couple more pushes, you can do this, let's go, etc.  I hold their hand or hold their back leg up to give them more room.  And they push a couple times, and out comes a kitten. 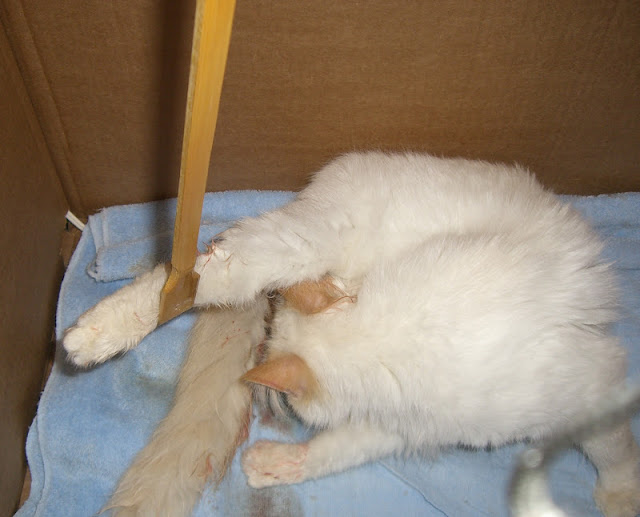 On an earlier post, I said I'd found a use for a wooden back scratcher with a curved hand on the end.  I used it to lift Elsa's tail to check for signs of impending birth for the last two weeks.  She didn't like my hand touching her below her neck, but the scratcher was fine.  I found another use for it tonight.  I held her leg up for her during each birth.

Having so many solid blacks cats that don't get adopted, I was so hoping that daddy wasn't black.  Once again, be careful what you wish for.  All eight kittens are orange.  Some a little darker, some a little lighter, but all are definitely orange tabbies.  They came so quickly, that I didn't take time to check for boys or girls, but most orange cats are boys.  I'll check tomorrow.

There are eight kittens, and mom has eight nipples.  No problem you say.  Well, one pair are located under her front legs, and one pair are under her back legs.  Two pair are out in the open.  Except when she's laying on her side to nurse, unless she's almost laying on her back, the bottom ones are hidden.  So there's usually only two nipples obviously exposed.  That does create a problem with eight hungry mouths.  After the first 24 hours when mom quits producing colostrum, a part of her milk that's very good for the kittens, I can supplement several times a day with a bottle for a few.

Even though things went perfectly, I was still as exhausted as Elsa.  I had to take a couple Advil for my back from bending over her box for five hours.  There seemed to be more bleeding with Elsa.  She was quite a mess, and I may take her in the shower tomorrow.  Or it could be that because this is my first light-colored mom, the bodily fluids were more obvious than on a gray, brown or black cat. 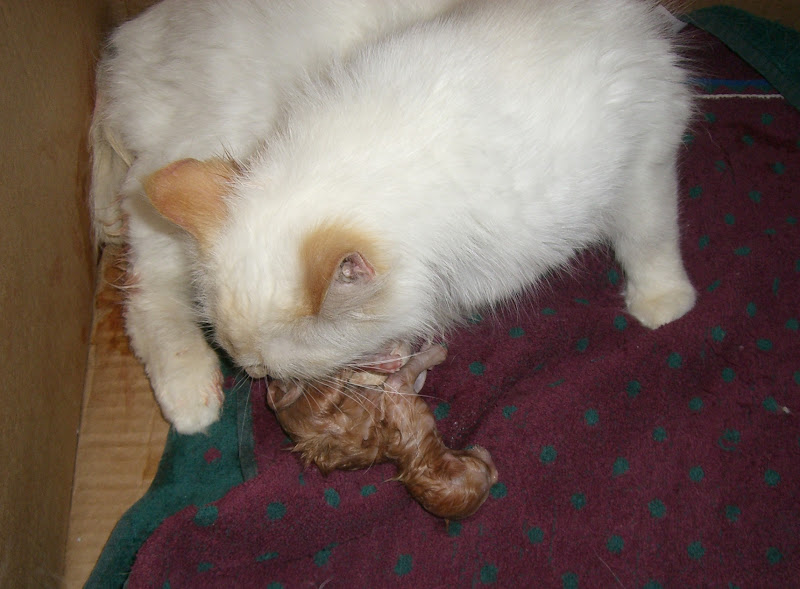 Even after four years of birthing kittens, I still sort of gasp when some come out looking like camels.  Their necks are long and their heads are small, but their noses are huge.  In less than five minutes, they seem to change into something that resembles a little kitten and I know they're not deformed. 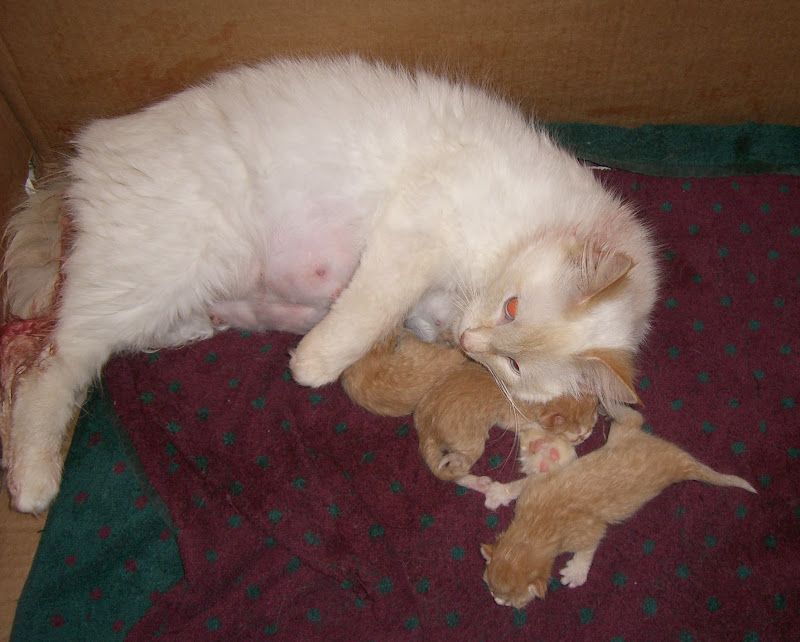 This is Elsa with her first three kittens.  After each birth, I'd let her clean it well, and then the next one was coming.  I had a plastic tub ready with a heating pad covered with a towel.  I'd put each kitten in it before the next one came.  Mom moved around and changed positions a lot, and the babies tend to get trampled if left in the birthing box.  After the first five, when things slowed down, I always let her keep the last one until the next one came.  She'd hear them crying sometimes, but never seemed worried about where they were. 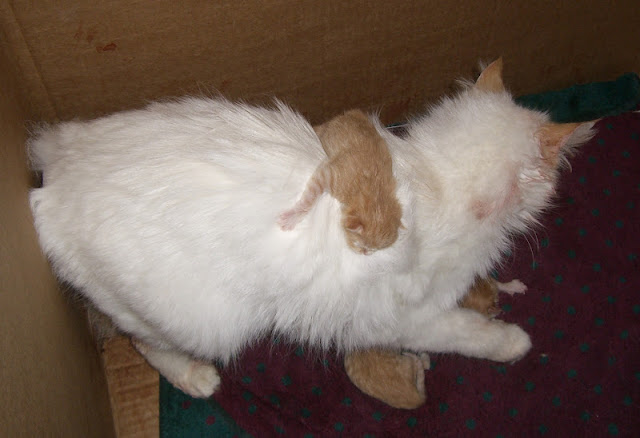 I didn't put this one there.  He climbed up all by himself. 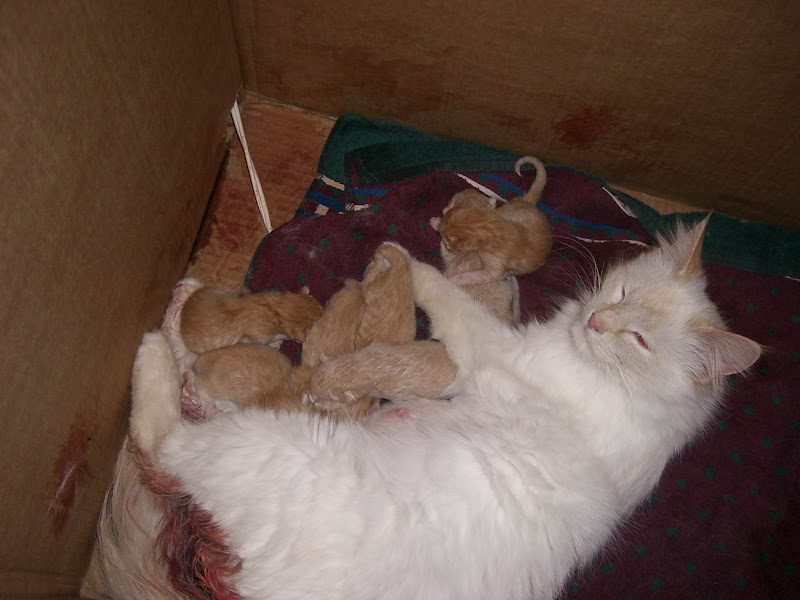 I think this is all eight kittens before I had to get a clean box.  It was really icky. 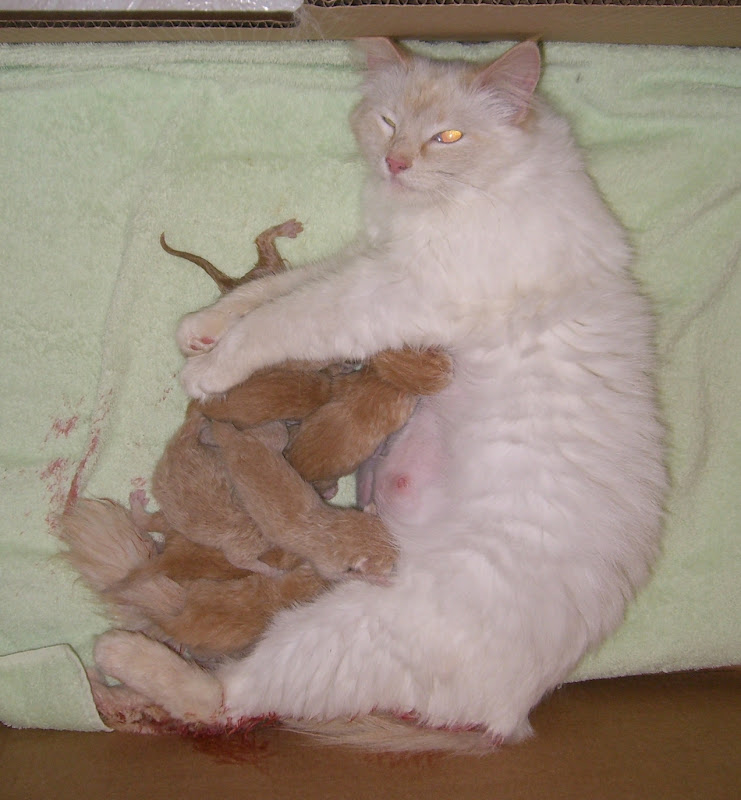 This is Elsa and all eight kittens in her clean box and almost clean towel.  The lightest one by Elsa's foot is the last one born that I was worried about.  He's going to be my favorite.  I tried to clean Elsa's back end up with a warm washcloth, but unless she spends all night cleaning herself, she'll be getting a shower tomorrow.

I'm a wreck, but everyone else is doing well.
Posted by Barb's Cats and Quilts at 10:01 PM