I got my first pregnant cat of kitten season on Thursday afternoon.  Elsa was rescued from a hoarder in Bowling Green, Mo, by a group called C.A.P.A. in Bowling Green.  It stands for Community Animal Protection Assn.  A very nice lady named Gail drove her all the way to my house.  They thought she was going to pop any day, and I think they're right.  Gail arrived about 2:30 pm, and by 5:30, I thought kittens were on the way. 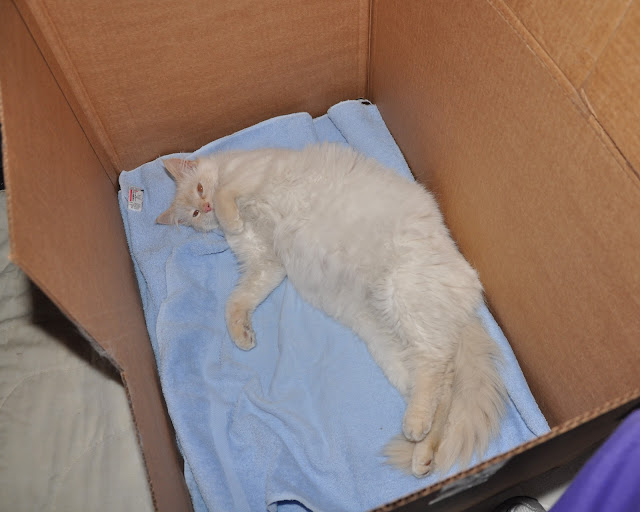 This is two hours after she got to my house.  Oh, boy, kittens tonight!!!  Elsa was laying in her birthing box, on her side, panting and kneading my hand.  After 10 minutes of that, she got up, walked out of the box, explored the room, and ate a whole small can of cat food and drank lots of water.  Then went to the litter box and peed and pooped.  My question of if she was litter box trained was answered.  Then, she layed on the floor and showed no signs of impending kittens.

Later that night, I let her out into the bedroom.  She jumped up on the bed with me, and I trimmed her front nails.  She is so sweet and loving and rubs all over me.  I can barely walk in the room without tripping over her.  I didn't know what to expect, except I knew she wasn't black, but was white and orange and long-haired.  Well, she turned out to be medium-haired, and cream with orange ears and buff tail and legs.  I hope her kittens are half as beautiful as she is. And I hope Dad wasn't black.  I still have four black cats I can't find homes for. 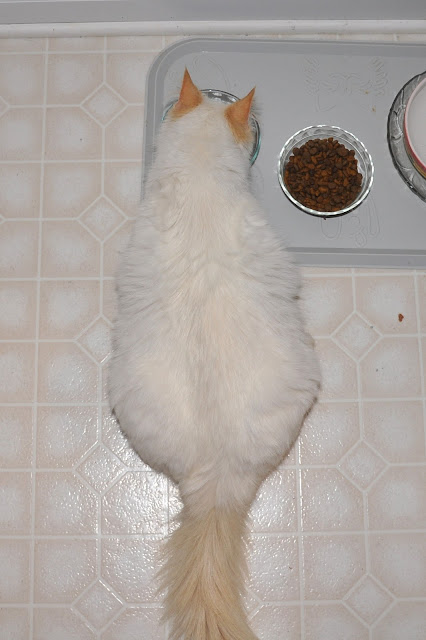 This was 10  minutes after she faked me out. 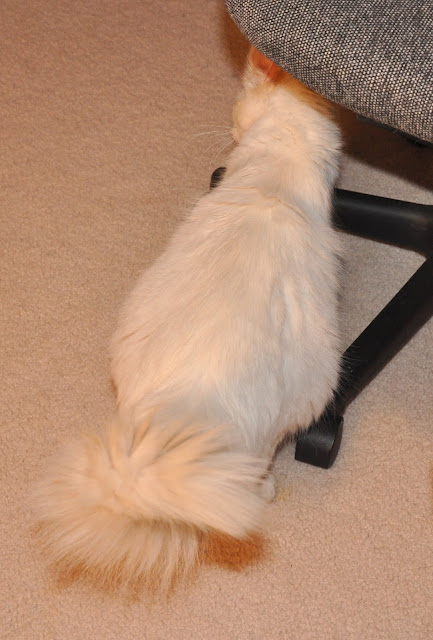 Elsa was exploring the bedroom.  Even without the longer hair, she's still carrying a load.  Without an x-ray, I'm going to say she's carrying six kittens.  I don't know how old she is, but CAPA had her tested , and she's negative for feline leukemia and aids.  Her eyes had some goobers in the corners, and her nose is a little stuffy, so she's on an antibiotic that's safe for pregnant cats.

No fleas or ear mites, but I gave her a dose of Revolution for worms, fleas, and a few other things.

I don't know the extent of the hoarding - how many animals there were, and I'm not sure I want to know.  She appears so be in very good health, considering her circumstances.

Maybe the cooler floor felt better than the box. 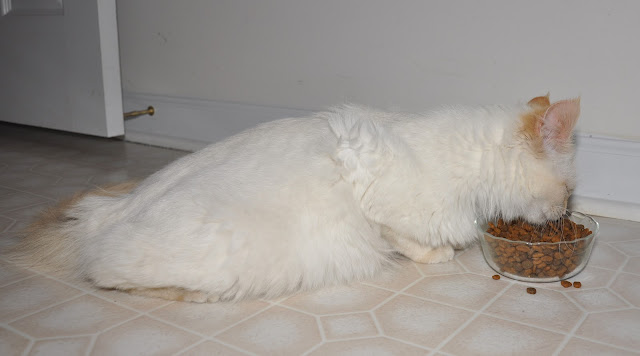 She doesn't eat standing up, but lets her rear end lay on the floor.  I can't blame her.  Why hold something up if you don't have to. 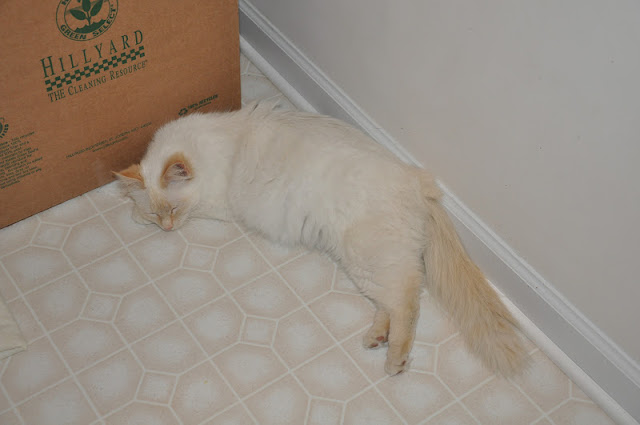 She ate three cans of food and almost a whole bowl of dry the first day.  Pregnant and nursing cats need three times their normal amount of food.  She's got lots of milk to produce soon.
So far, she's more comfortable on the floor than in the birthing box.

1:00 am Sat morning and no kittens.  If things still look okay by late Sat morning, I'll still take cats up the Petsmart, but if if looks like she's serious, I'll stay home.  When I first got into fostering, my mentor, Angie, took a lot of the pregnant cats, because she was home during the day.  She would tell me stories about needing Marcy, the vet, at 3am when a cat was in trouble and needed medical help to live, etc.  I thought there's no way I could ever do that.  Then, a pregnant cat needed a place to go and I was the only one with an empty bedroom.  Piece of cake!  The cat had two of them when I walked in one morning to feed and scoop and check on her.  I watched while the other three were born over the next four hours.  Up until this time, I had only had orphans that needed bottle feeding six times a day.  Well, this was great!  Mom feeds them, cleans them, and cleans up after them.  All I did was feed and scoop mom.  I was liking this.

Elsa will be my sixth or seventh pregnant cat, I think. Knock on wood, the most I've had to do to help was to gently pull one out that was back feet first, and wipe the sac away from the nose of #3 while Mom was still licking #2 off.  Now, I love the births.  I'm so excited, I'm going upstairs and check on Elsa.

More tomorrow
Posted by Barb's Cats and Quilts at 1:07 AM