Simba, My Next Foster Kitten 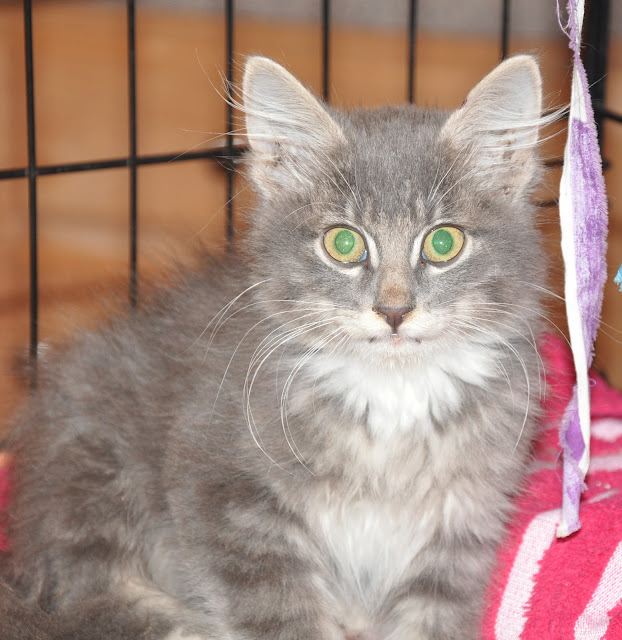 This little 9- to 10-week-old boy is Simba, and he'll be my new foster kitten in a couple weeks, after his second surgery.  We think he was hit by a car.  He had two broken legs when he was rescued from a busy intersection.   One of my adopters, and friend, Barb, and I met Simba's rescuer, Angie, last Sunday, picked him up and took him to an emergency vet clinic.  Angie's kids named him after the Lion King.  He had x-rays and pain meds.  When the tech brought him back, Barb held him to her chest in his towel.  He just melted into her and snuggled.  He is such a beautiful, sorry, handsome boy.  And so sweet.  Both legs on his right side were broken, but he didn't seem in pain - even before the meds.  It had been at least four days since it had happened.  I just can't imagine what he was feeling, but he never cried once.

Since I had just had eye surgery three days before, Barb drove and took us back to my house from the clinic.  I put a heating pad under a towel in a small crate.  Simba was dehydrated and very hungry.  He ate half a can of canned food, a small bowl of dry, and two small bowls of water over an 8-hour period.  He even wobbled over to a shallow litter box and used it several times.  He still had dried poop and litter on his back end, so after he was settled in, I very carefully held him under the kitchen faucet and washed his butt off.  I had left a message on our regular vet's phone on Sunday afternoon that I'd be bringing him in Monday morning.  I took his food away at midnight hoping they could squeeze him in and do the surgery Monday.  Since he was dehydrated, I left a little water in his bowl.  He was matted again in the morning, but I knew the vet tech girls would clean him up while he was out. 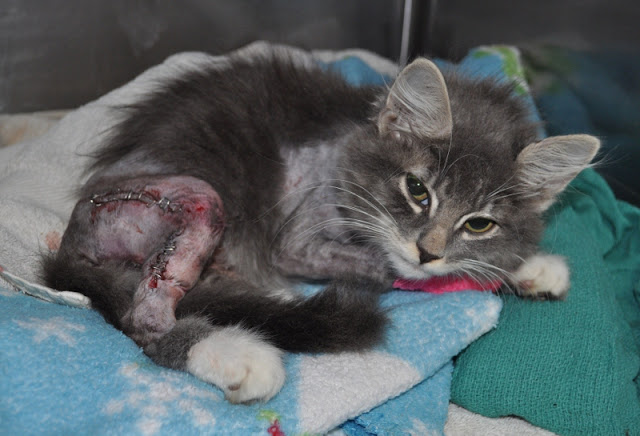 Cheri stopped by the vet's office on her way home from work and took these two pitiful pictures of Simba.  The back leg had two breaks, both above and below his knee, and each got pins.  When Marcy was almost finished with his back leg, he wasn't doing so good, so they weren't able to get to the front leg.  He'll have that done this week. 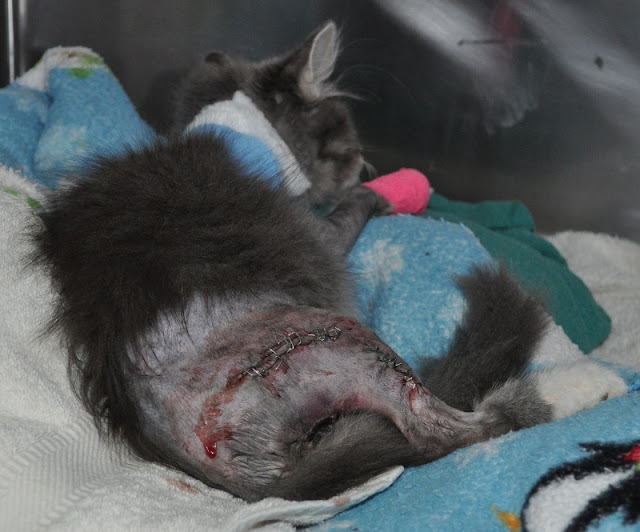 Monday evening Simba went home with Sharon, the head of Snuggle, a wonderful organization that specializes in at-risk care for kittens.  Sharon knew how to take care of him, and I didn't.  I can do diarrhea, colds, and birthing, but I've never had a broken bone.  Okay, I stepped on a kitten's paw once and broke his toe, but he stuck it under my foot - honest!

Simba's surgery is costing over $2000, even with our discount.  Heartland could sure use your help.  If you go to our website, http://www.hhsrescue.org/, and click on Simba Needs Your Help, you can read more about him.  Click on the Donate symbol to make a much-needed donation.  Or you can send a check to Heartland at the address at the bottom of the page.  Every little bit helps.  Thank you.  I'll be keeping everyone posted about his recovery when I get him.
Posted by Barb's Cats and Quilts at 11:19 PM