First, before I forget, this is a link to a YouTube video of "an owl and a pussycat are best friends."  It's truly amazing.
http://www.dailymail.co.uk/news/article-1387597/The-owl-pussycat-best-friends.html?ITO=1490

The animal control from a neighboring town, Warrenton, contacted Heartland to see if someone could take a mama and two kittens born a few days before.  Jen, a foster mom, said she'd take Ellie and her four babies, clearing a room so I could take these.  She picked them up Thursday night, and I drove to Warrenton Friday morning.  THEN, after I signed for them, the officer asked if I could possibly take two more.  They were scheduled for euthanization the next day.  How could I not.  I went for three and came home with five.  A stop by the vet's on the way home showed mama had roundworms, coccidia, and hemobartonella, an anemia/blood condition.  The hemobart was the only surprise.  We expect any cat we take in that's been outside to have at least one kind of worm, a parasite or two, and/or the sniffles.  No sniffles with any of these girls, but Mom and babies are on meds for a while and are doing great. Everyone should be fine in a few weeks. The good news is nobody had feline leukemia or aids.  No name for mama or the babies, yet.  Mom is very friendly and doesn't mind me handling the babies at all.  I'd hardly seen her nurse, so a couple nights later, I took the babies and sat in the recliner.  Mom came over and laid on my lap.  I put the babies on mom and she nursed them while laying on my lap.  It was so cool.  I'd never done that before - and would guess that she hadn't either.  I've done it a couple more times since then and took my Kindle with me.  What on earth can be better than reading a good sexy book with a cat nursing her babies in my lap!  It was awesome. 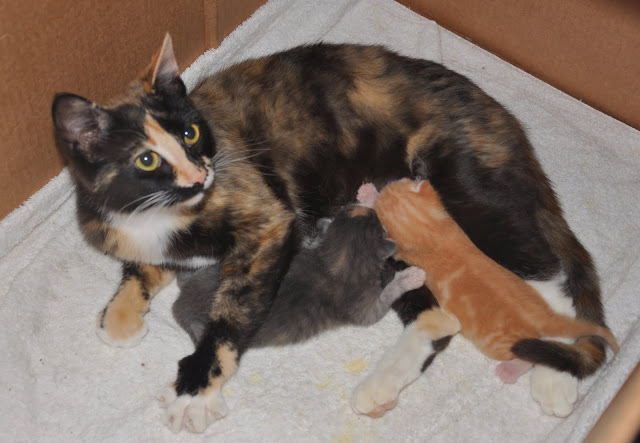 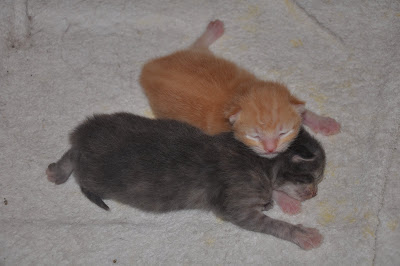 The babies were about 5 days old when I got them, about 12 days old today.  The orange one's eyes opened Tuesday.  Gray one's are still closed today.

The other two are females, about a year to a year and a half old.  One is a short-haired gray tabby and the other a medium-haired brown tabby.  They were found at the shelter's front door in the same carrier.  They both have four white feet and very similar white chest markings.  I think they're probably sisters. They had no fleas or ear mites and are super friendly, indicating they were indoor cats.  When names don't come to me, I use names from whatever book I'm reading - and I'm always reading a book.  The brown one is Jilly, and the gray one Josie. Jilly sat down, looked at me, and I took a couple pictures.  Josie, however, had no intention of posing. 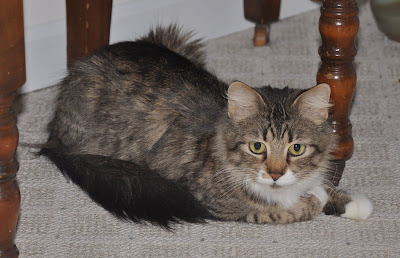 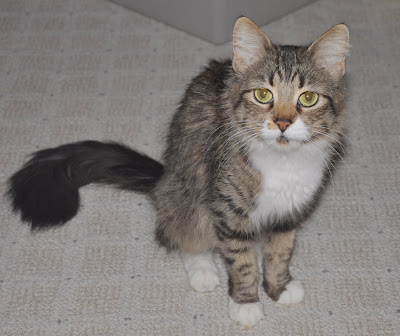 Jilly is very friendly, but takes a back seat to Josie.  She lets Josie eat first and come to me first. 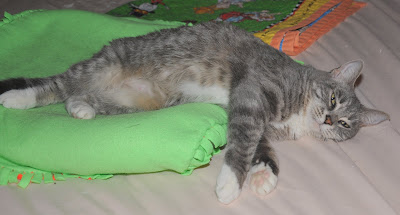 This is Josie being Josie.  She's a goofy, playful cat.  There's two cat beds on the real bed.  The one Josie is on has a heating pad under it and she's in it almost every time I go in the room.  Jilly, being the submissive one, hardly gets to use it at all.  The other two heating pads are being used in the babies' boxes, or I'd give Jilly one, too. 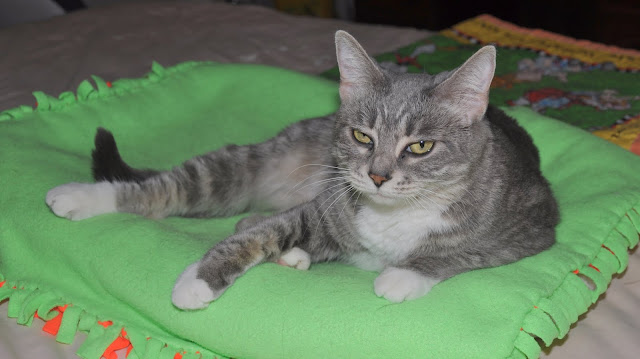 Finally, a decent picture, although her eyes are a little squinty.  From the minute I let her out of the carrier, Josie was rubbing and cuddling with me.  She's just a doll. Beautifully marked and sweet as she can be.  Josie and Jilly will be ready for adoption in a couple weeks.
Posted by Barb's Cats and Quilts at 9:41 PM