The two kittens in my last post have turned out to be what is called "swimmer" kittens.  Their muscles aren't working very well and their legs are straight out from their body when they walked and it looks like they're swimming.  They walk more like turtles than kittens.  I was pretty upset when I took them to the vet and expected the worse.  Marcy, our great vet, said to wait a couple weeks and see if there was an improvement before we made any decision.  I'm very happy to report that after two weeks, now at 4 weeks old, they have improved a lot.  They've gone from scooting on their bellies to holding themselves off the floor and getting their feet under their body about a third or fourth of their steps.  Their room is carpeted, and I haven't clipped their nails so they can get a little more traction.  And they're just so darn cute! 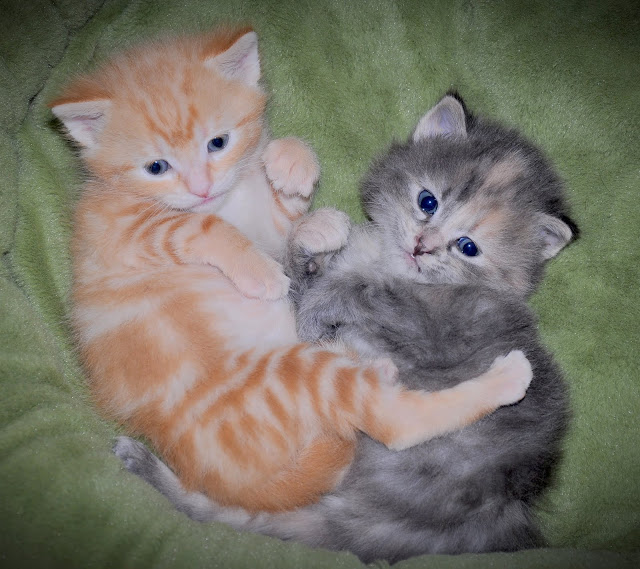 I've named the mom Meg, and John has named the orange male Todd and the gray female Winnie. 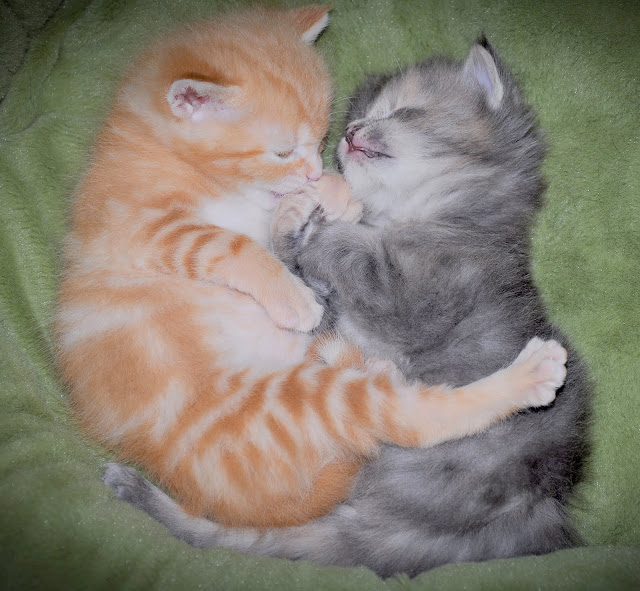 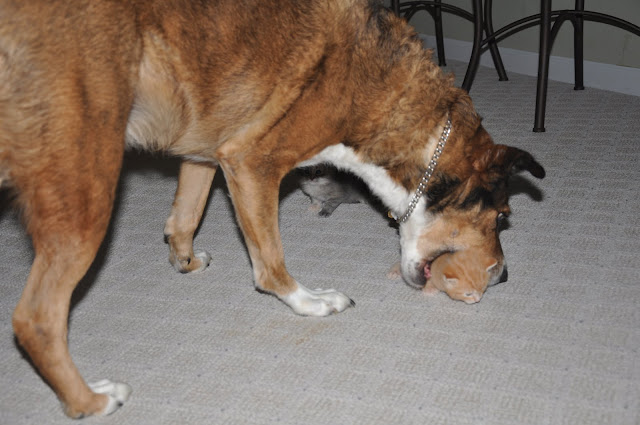 NO KITTEN WAS HARMED IN THE MAKING OF THIS PICTURE.  I brought the kittens out into the family room to show John how much progress they'd made, and Lucy had to get in the middle of things.  She does love kittens and is a herding dog, so she wanted to take them to another part of the room and keep them in a pile. At the same time I snapped the picture, I calmly told her "no" and she never got the kitten off the floor.  She's very good, and wouldn't have hurt him.

When I'm bottle feeding orphan kittens, I'll put them in a plastic storage tub to take them into the kitchen to feed them at the kitchen table and be able to keep them all together.  I mark them on a checklist as I take them out of the tub on the floor to feed them and have come up one short at the end several times.  I'll look up and see Lucy slowly walking into the living room with her head down.  I'll gently say, "Lucy, put it down," and can almost hear her say dammit.  A couple times she made it all the way into the living room and was curled up licking the kitten. Her kitten.  Even the cats and kittens who hiss and spit at her in the beginning, are friends in a couple days.
Posted by Barb's Cats and Quilts at 9:17 PM