Davy and Stewart are Adopted

I should have posted this last week, but life got in the way.  Two of my best kittens got their forever homes, and I couldn't be happier.  Well, I could be happier if I could keep them myself, but I already have three and that's my limit. 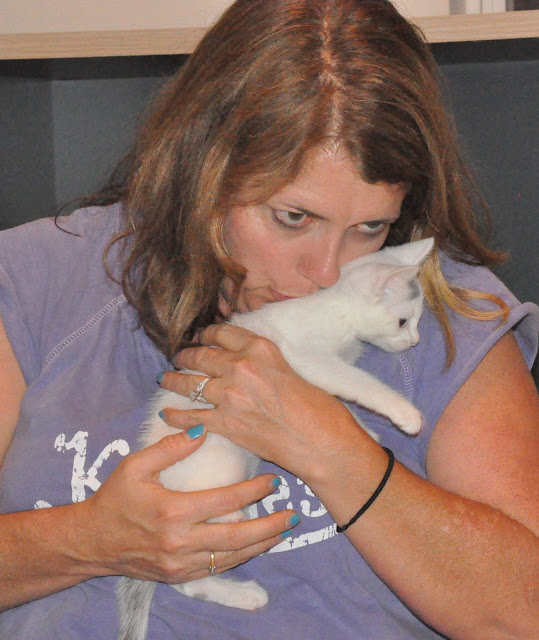 Stewart went home with Barb and Dave and kids.  He settled in from day one and is a well-loved member of the family already.  He's also made friends with the other three cats she has.  Barb and her neighbor, Betsy, came over a couple weeks ago and played with kittens.  Barb took one look at Stewart and fell in love.  It was impossible not to.  He is such a sweetie.

Thank you, Barb, for adopting my baby and giving him a wonderful home. 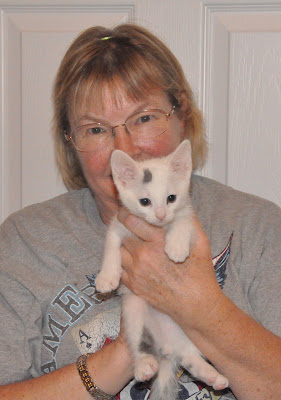 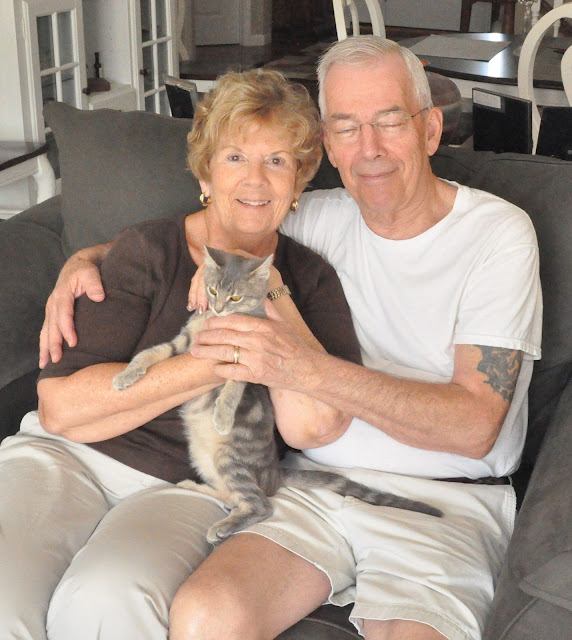 I don't want to start a trend of posting my picture with every adoption, but they want to take my picture after I take theirs.  Stewart is one of those special kittens, like Micky, Davy and Alissa, that I won't adopt out to just anybody. I admit that my standards have been a little lower on adopters for some cats than others, but not these guys. They deserve the best.

A super-nice couple saw Daisy, my very shy cat, on the web and wanted to adopt her.  I wrote about this in the "Micky and Davy Put on a Show" blog of 9-26.  I knew Jean wanted a lap cat and that wasn't Daisy.  When I showed her Davy and put him in her arms, he melted into her and she was a goner.  I knew both Davy or Micky would be, the perfect cat for her, and Davy was closer when we went in the room.  About a week later, I was going to be close to where they lived and set up a visit.  I know cats usually adapt very quickly to their new home, but he didn't have to adapt THAT quickly.  He did act like he remembered me when I walked in, but he had also settled very nicely into his new house with Jean and Robert.  I took two family photos.  Jean's eyes were closed in the first one, and Robert's were closed in the second one.  Sorry, Robert. 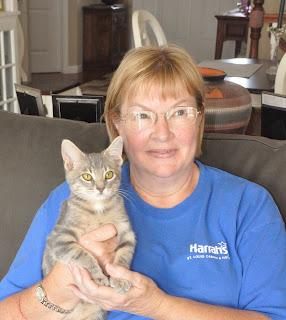 Then, they wanted to take a picture of me with Davy.  I usually take such horrible pictures, but this one wasn't too bad, and Davy is one of my favorites.  Jean and Robert are so happy with him and can't get over how friendly and personable he is.  I do spend a lot of time with my kittens and cats.  Most respond and are very friendly.  I only have a couple, Daisy and Trish, that are very shy, and a couple that should be only cats, like Mike and Ben, two of the house panther cats. The rest are all super cats.

Thank you, Jean and Robert, for giving my boy a good home.
Posted by Barb's Cats and Quilts at 9:23 PM