Saturdays at Petsmart are quite exhausting.  It's a lot of standing around, waiting for people to walk by and look at "your" cats and kittens, falling instantly in love with one, and adopting it on the spot.  And, talking to lots of people just looking, parents who are allergic to cats but bring their kids up to pet kittens, and the people who just love cats and want to see who's new and who got adopted since last week.  Some of the regulars know the cats' names better than I do!

I load my crates in the Highlander on Friday afternoon.  On Saturday morning, it's hard staying one step ahead of the cats.  As soon as they even see a carrier or my Heartland t-shirt, they're under sofas or on top of cabinets.  On Friday I make a list of what cats I want to take and what crate they go in.  I can stack three crates on the rolling platform John made.  On Saturday morning, it's easy to get the ones in a bedroom, but finding the particular cats that are loose in the house is a challenge.  When I can't catch the ones I want, I have to change cats, but be sure that the two or three in each cage will get along for the next five hours in very close quarters, in a loud and noisy store, with strange people, kids, and dogs walking around, music playing, and strange smells.  I leave my crates set up in the car, but wouldn't be able to lift the crate in or out of the car if it had three adult cats in it.  So, unless they're small, two cats go in a carrier, and one is in the crate, and then I put the carrier in the crate, too during transportation.  It comes out so I can lift the crate out of the car easier.  Then it all gets unloaded in the store parking lot, wheeled in the store, wheeled out, and repacked.  I drive 10 minutes home, unpack cats, unload crates, etc.   Jeez, I needed a drink and two Advil.  I wasn't feeling very well today.  Just a backache and a queasy tummy.   I know pill directions say not to mix the two, that "alcohol may intensify."  I was counting on it.

So, having done all that, and standing for five hours, I'm now on the deck with my cats, my Kindle, and a bottle of Mike's Hard Berry Lemonade.  Drinking out of the bottle makes me feel like I'm really drinking an adult beverage.  I hear a noise on the canopy, look up expecting to see Lilly, but see Zach instead, looking at me through an 18" hole in the canvas.  The canopies only last three years and this was the third year, so it's pretty fragile at this point and has several rips and holes.  I told him to get down, and I could swear I heard him mutter, "Yeah, right."  He then jumped up onto the roof of the house.  My only explanation for how my little brain didn't register that the edge of the roof and the top of the canopy were 12" apart, or how a cat could easily go from one to the other is that the canopy is UNDER the eave and I can't see the roof, so therefore, it doesn't exist.  Then he disappeared.  I threw cat treats on the kitchen floor to clear the cats off the deck, then treats on the deck, shouting Cookies, Cookies, to entice Zach, who is still gone. 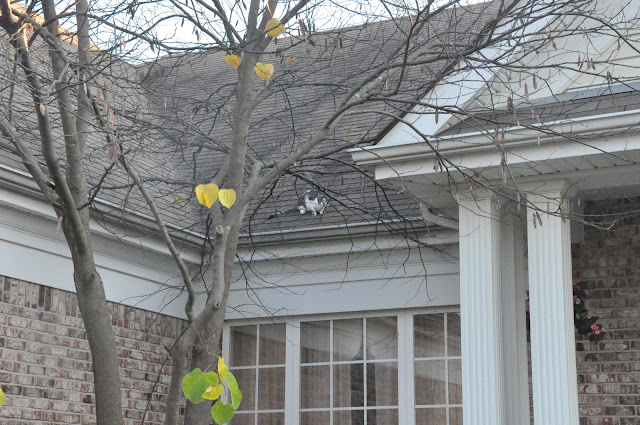 Back up the hill to the front yard - and there he was.  I snapped the picture and wondered how I was going to get him down?  Then, I wondered how was I going to explain to Cheri that one of my fosters jumped off the roof and ran away. 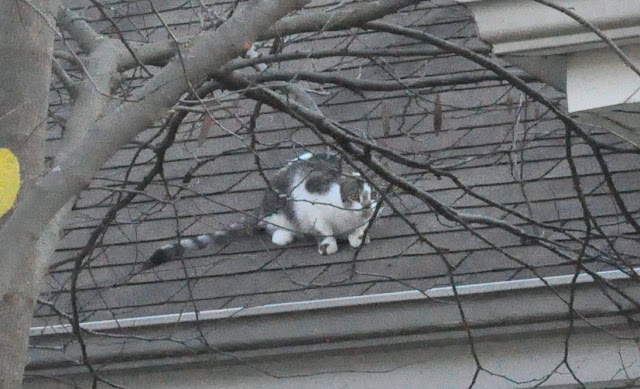 Before I could take a second picture, he ran up the roof and over the peak to the back.  I sure didn't need this today.  This time I went in the house.  I would wait on the deck for him to come back.  Chasing a cat only adds to his adventure and makes it more fun.  Guess who was there waiting on me. 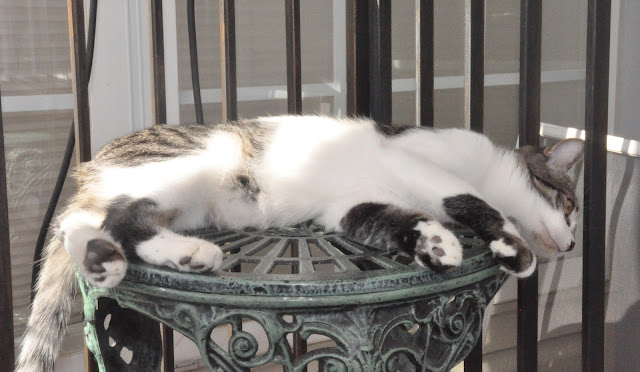 Like he'd never been gone.  Never put his mama through hell and a heart attack - not to mention the Exercise!  Like he'd been laying there all afternoon.  Poor thing looks all tuckered out. I'm going to cut the canopy off of the part closest to the house.  I only need the other half for shade.  I don't want to take it down, yet, because this is the perfect deck-reading weather.  I put Zack in the house, reclaimed my lounge, Kindle and not-so-cold drink, which I drained, anyway.  I think I may have closed my eyes for half an hour, too.  It was getting a little cool outside, so I went downstairs and sat with John while he watched cooking shows and soccer.  I think I closed my eyes again, just for a couple minutes.  Somewhere I heard John ask if we were still going to the party.  Yeah, I'd love to leave my recliner, go change clothes, try and do something with my hair, put make-up on and be ready in....30 minutes!

John's been going with his friend, Hank, out to a shooting club on weekends for a couple years.  Hank has all kinds of guns and ammo, and won't let John pay him for anything, so we try to take them to dinners occasionally.  The club has four competitions during the summer.  John usually places in the top four out of 25 or 30.  He even came in first place once, beating the two-time national champion.  This party was the season-ender awards party at one couple's house.  John came in 3rd place for the year and got a framed certificate.  Pretty cool.  The MC explained that the scores were very high and close this year and that he'd compared them to some national scores for the same event and that their club had higher scores.  So, John is shooting at a National Level!  Pretty good for someone who doesn't even own a bullet, much less a gun. Congratulations, Sweetie!  We had a great time and stayed till midnight!

We also got stopped in a police checkpoint just as they were towing somebody's car off.  John'd only had diet Pepsi, so we were good.  This was my second checkpoint stop.  Ree and I were coming home from a quilt guild meeting about 10:30 one Thursday night and had to stop.  When they saw us and heard "quilt guild meeting" they waved us through. Rather insulting.  They think older women who make quilts don't drink!  They should be at one of our quilt retreats.  One of which is coming up in 15 days.  Woo Hoo!!!  Fifty hours of not fixing food, doing laundry, cleaning, shopping, errands, and scooping.  I'll miss my cats and kittens, but I know John's taking good care of them.  Nobody can starve in 2 days, and they all drink out of the toilets.
Posted by Barb's Cats and Quilts at 2:26 PM