It all started with cleaning out the pantry Sunday.  I found a box of brownie mix that expired over two years ago.  What the heck.  I had a new 9x13 baking pan I wanted to try out and brownies sounded really good.  My fridge is about 25 years old and has had a problem with cold spots in the refrigerator part for a long time.  I throw frozen lettuce and veggies away every week.  I had 4 eggs and that's what I needed.  When I cracked the third one, it was weird.  It was frozen!  So was the fourth one.  FYI - you can't microwave eggs low enough to thaw them and not cook them.  John was only too happy to drive four blocks and get me more eggs.  The brownies turned out fabulous - thick and half cooked. No dry, cakey brownies for me.  I took half the pan to the vet techs Monday morning when I took little Crystal in for her spay/shot package. 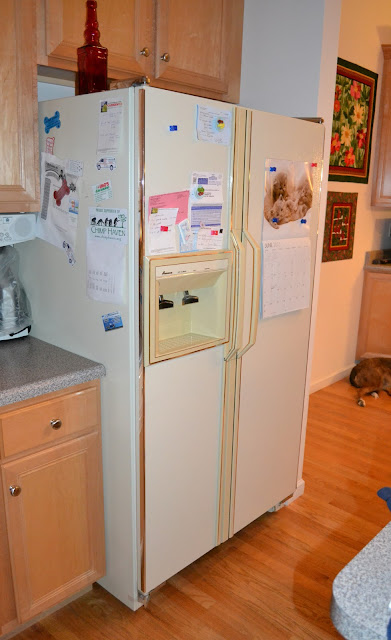 Monday we went to Lowe's for a couple things and looked at refrigerators.  I think mine was about $400 back in the '80's.  Now, they're thousands.  We found one that had a couple dents on the side at the bottom that would be against the wall and was $500 off.  It was discounted more than I paid for my old one!  It was stainless steel, and I hate stainless steel, but it matched the other appliances in my kitchen.  We bought an inventory home, so I didn't get to pick out anything.  Bought it and had it delivered today.  I spent all day yesterday cleaning out the one in the garage to have space for the stuff from the kitchen.  I threw out four trash bags of old, dried-out food.  I date every food item with the month and year.  I must have cleaned out in '06, because the oldest stuff I found was dated '07.  Only 6 years ago.  Freeze-dried pasta, meat and bread.  Yuck.  Bags of frozen vegetables that were more ice crystals than vegetable.  Trash doesn't get picked up until Monday morning, and it's been very hot here, lately.  Things are going to get ripe.  I got all the kitchen stuff in the garage last night. 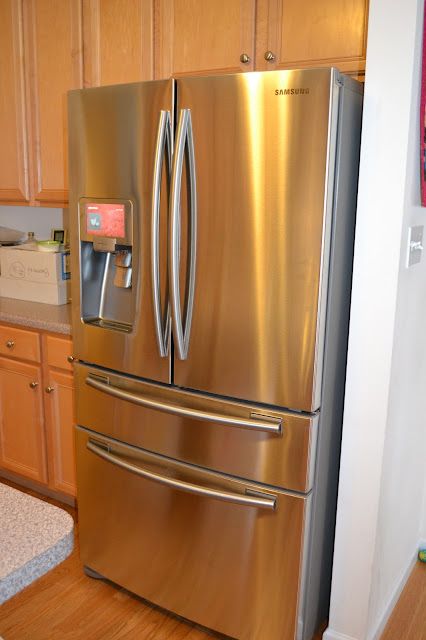 The new one looks a lot bigger in my kitchen than it did in the store.  I thought they'd be closer in size since they were the same 36" wide.  Except this one is a couple inches deeper and taller.  A close fit against the island.  Oh, did you know that magnets don't stick to stainless steel?  Yet another reason to hate it, not to mention the fingerprints if you get within 6" of the thing.  But, it looks great. 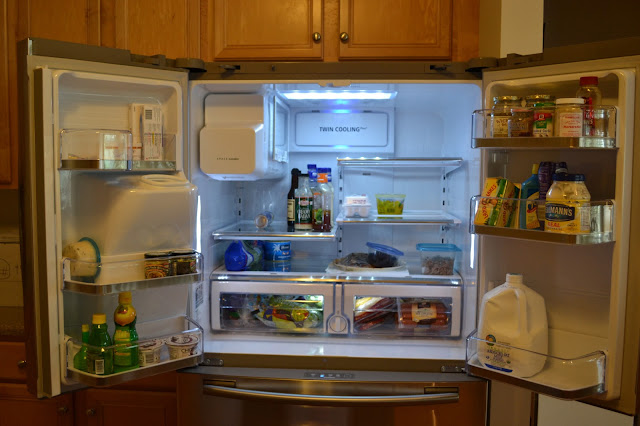 Everything looks so shiny and bright.  The water filter is that little round white thing between the two bottom drawers.  The water tastes better than any bottled water I've every had. 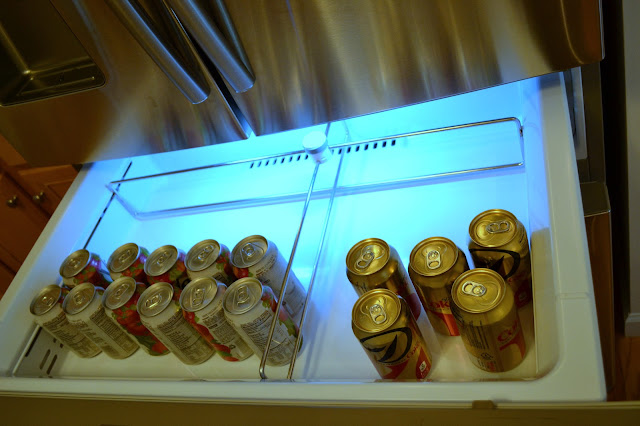 The shallow drawer below that is the drink drawer. 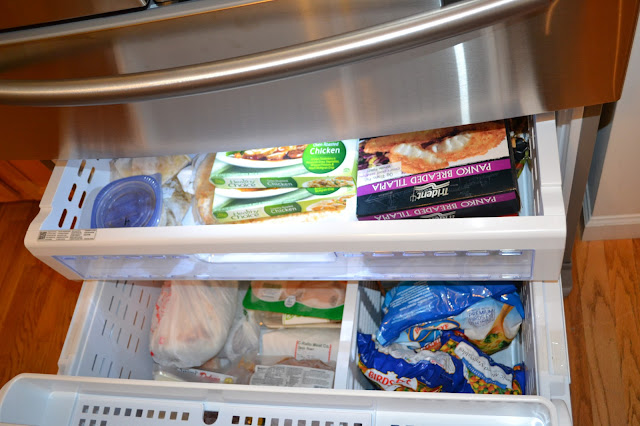 There's a few things left in the garage freezer, but this is about it.  Prepared food in the top draw, meat and chicken on the bottom left, frozen veggies on the right.  That little shelf at the bottom of the picture flips up so you can stand pizza boxes up in the bottom drawer.  I swear we're eating all this before I buy anything new.  Two people don't need any more than this.  I know, it's just a refrigerator, but it's the first new one I've had in 25 years!  We tend to keep things till they die.  And for what it cost, I'm getting a blog out of it.