Sasha's kittens are growing up.  They were nine weeks old last week and got their package at the vet -  spay/neuter, microchip, kitten shot, and testing for feline leukemia and aids.  Everybody was fine.  They'll be ready for adoption Saturday. 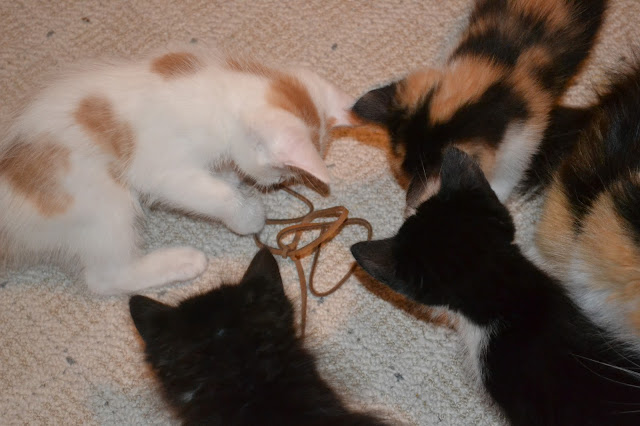 I had some leather strips to make cat toys with, but the cats like the strips plain, too. 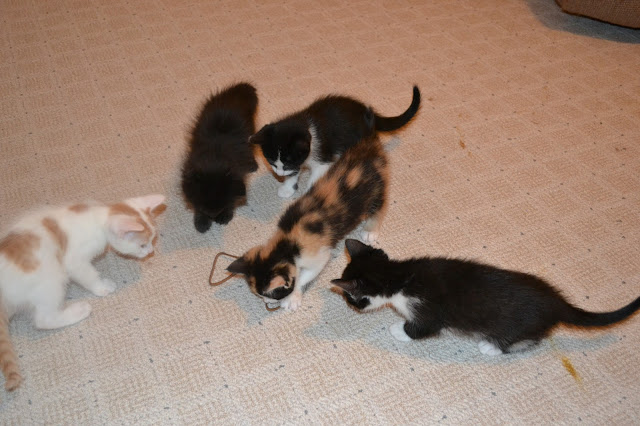 From the left, Robbie, Christopher, Katie (the calico), Spike above Katie, and Etta on the right. 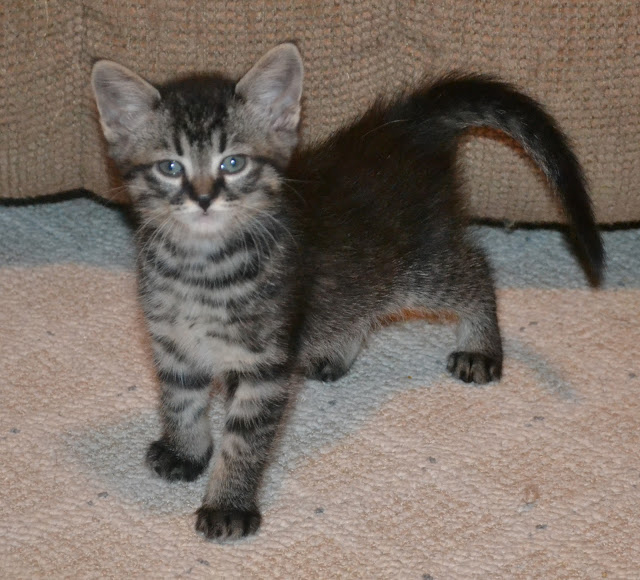 This is Rose, and she's as sweet as she looks. 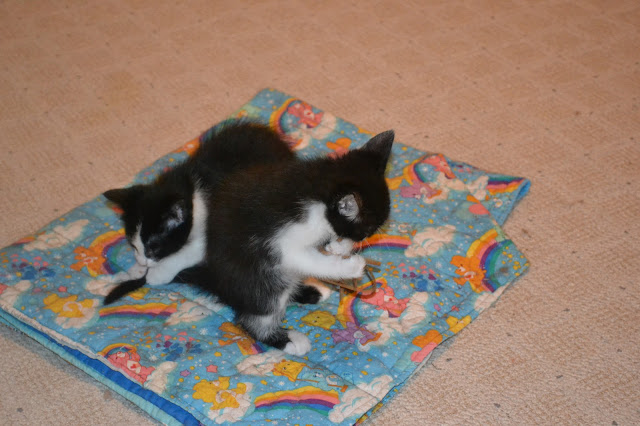 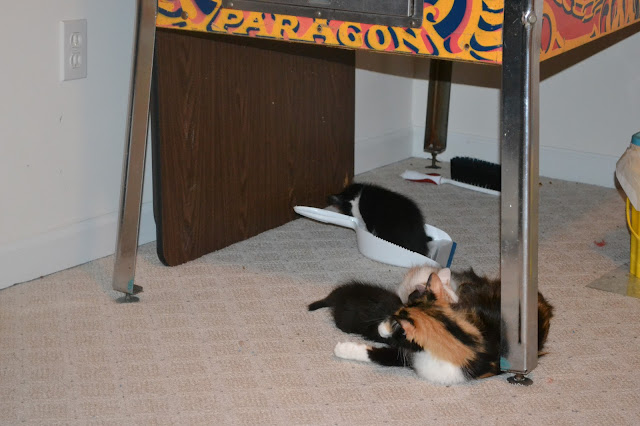 With kittens, everything's a toy - even a dustpan.  Mama Sasha is still nursing a little, but these guys mainly eat canned and dry food, now. 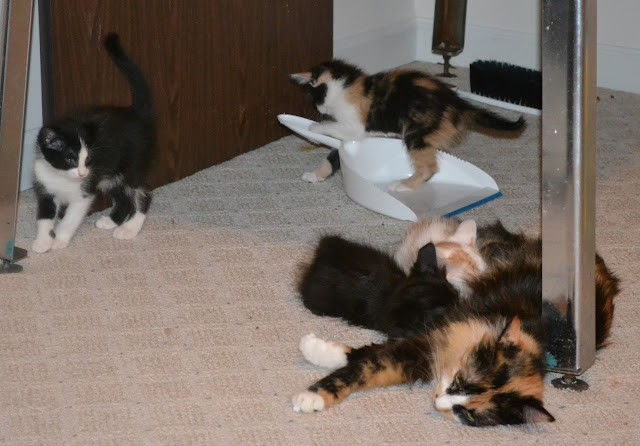 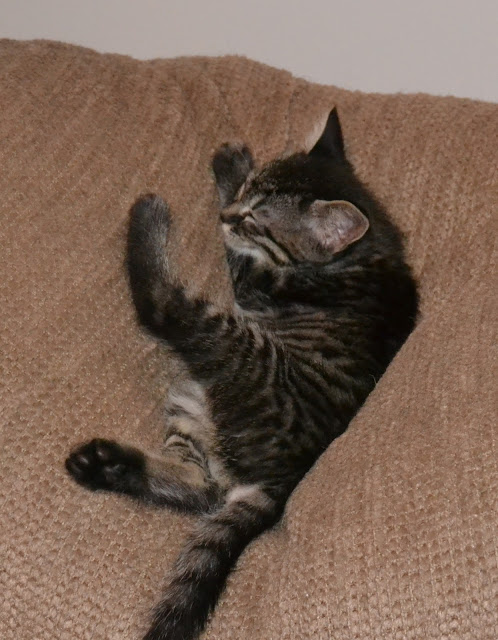 Rose is sleeping on the back of the recliner. 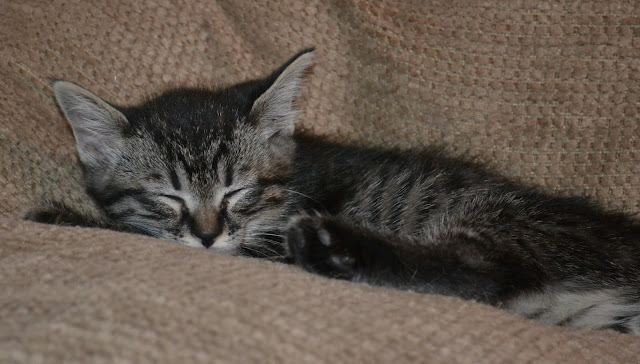 A front view of my little angel. 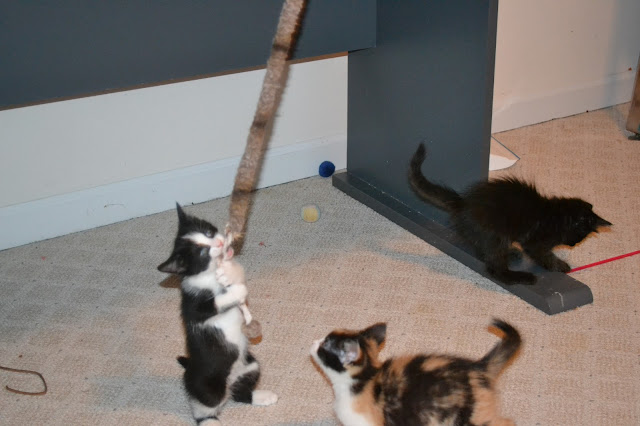 Spike is playing with the fuzzy tail that I hung from the table.  It's a winner.  The kittens are slowly calming down as they approach 10 weeks.  The time from 7-9 weeks is the crazy insane running and playing, biting everything, and don't-touch-me age.   The kitten equivalent of the Terrible Twos.  They're starting to get their sweetness back, but in another few months, they'll be teenagers for a few months, then calm down again after that.  They definitely have growing cycles like human kids.  They're considered adults at a year old. 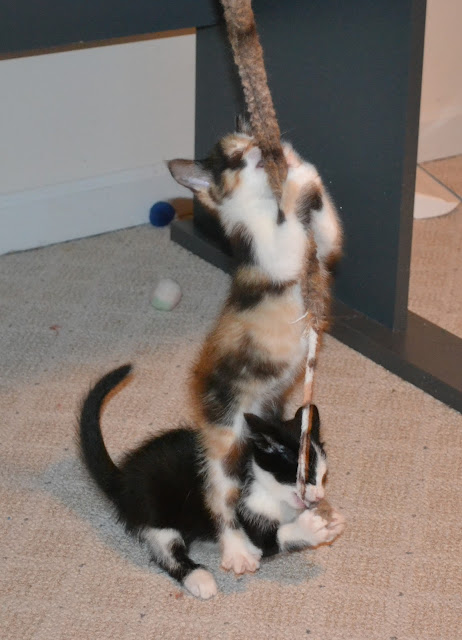 This was one of those lucky shots just taking pictures one after the other.  Katie and Spike. 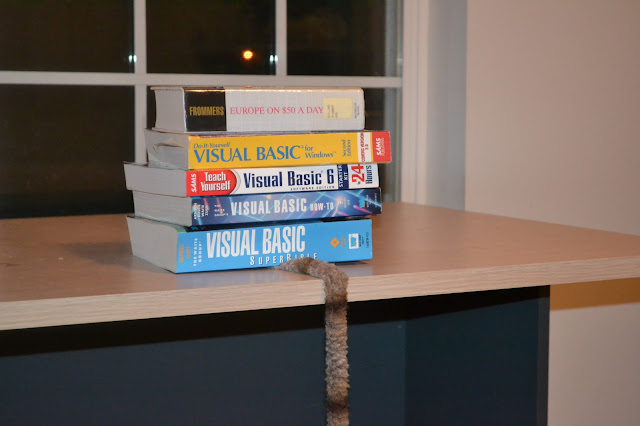 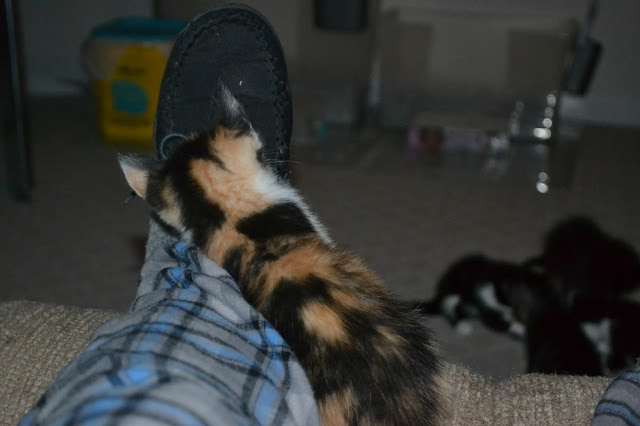 Katie came up and fell asleep on my leg. 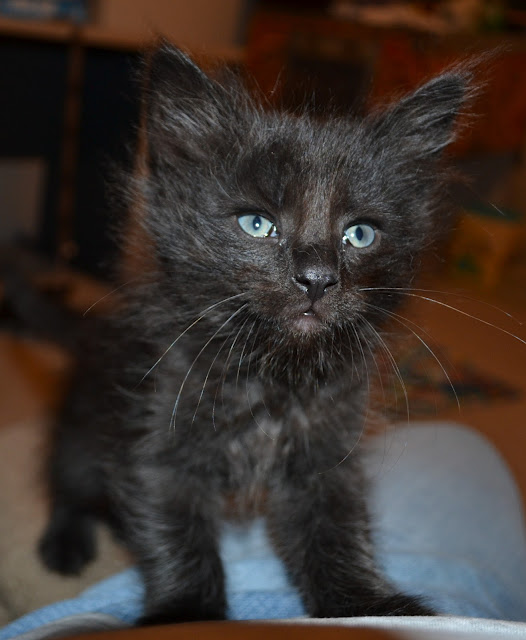 This is Crystal/Christopher.  She went to the vet's Monday for her package.  She not Sasha's kitten, but is the lone survivor of another foster mom's mama who wouldn't nurse. She's three days younger than Sasha's kittens, and Sasha adopted her immediately.  Telling the sex of a kitten isn't hard and we do it from day one.  They either have a nubbin, or they don't.  She didn't.  However, when Dr. Marcy was doing her spay, she didn't find any ovaries.  Crystal was a boy whose testicles hadn't dropped down, yet, so he looked like a girl.  Marcy called and said Crystal is now Christopher.  That's fine.  One less name I have to come up with.  I just call him Chris. His fur is black, but he has long guard hairs that are white.  They give him a beautiful silvery look.  And I'll always think of him as Crystal.  He and Robbie are the cuddlers.  Now.  Subject to change. 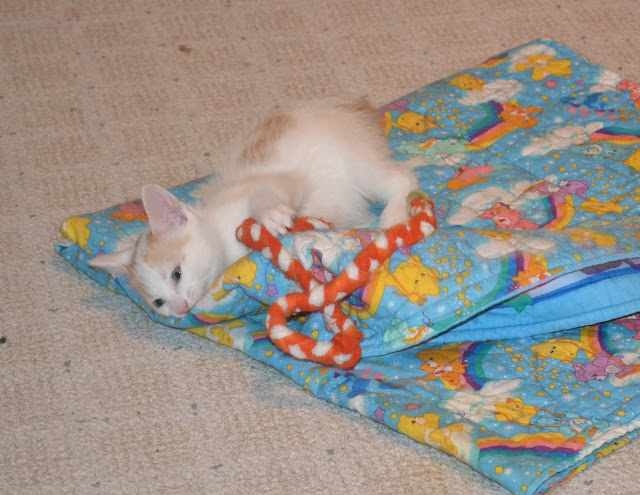 Robbie is taking a rest on his little quilt.  He's usually the first one to come up on me in the recliner after they all run around like maniacs. This is a little strange, but two of these kittens are now Rob(bie) and Chris. John's brother is Rob and Rob's wife is Chris. 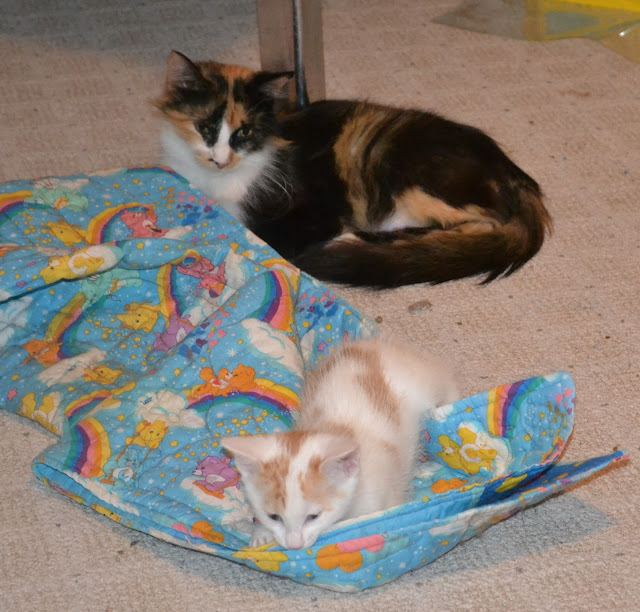 Sasha's been a great mama.  She got very thin last month, and a blood test showed she had an intestinal bacteria, but one Marcy has only seen in dogs.  Just trying to keep my reputation for bringing new, weird stuff to my vets.  After a couple medications, lots of canned and no-grain food, she's regaining some weight, finally.  I was really worried about her.  The kittens have enjoyed the extra food, too.

I made package appointments for 10 more kittens in the other two rooms in the next few weeks.  That will finish everybody except the four mamas.  They'll need their packages when their milk dries up.  Then they'll be ready for adoption.