Besides all the foster cats, I have three of my own.  I adopted brother and sister kittens a few years ago from Heartland and named them Buster and Xena.  Buster was named after my favorite rabbit I had years ago.  A friendly, adorable Himalayan dwarf that was a house rabbit.  Xena was named after Xena, Warrior Princess.  Even as a kitten, she would walk around the house looking up at a shelf or counter, and you could hear her thinking, "How can I make it up there?"  She would spend hours figuring out how to get in places our other cat never thought about. I told her if she didn't quit that, her neck was going stay in that position.  I made it about two and a half years without adopting any of my fosters myself before I succumbed and became a failed foster mom.

All because of this super-sweet orange and gray tortie that lived only to be held in my arms 24/7.  No way could I allow anyone else to adopt this little girl.  Lilly greets everybody and has never met a stranger.  Anyone sitting at the kitchen table will have Lilly sprawled in front of them, on her back, demanding to be petted.  When I do a home adoption, Lilly will lay down on top of the adoption papers they're trying to fill out.  I tell them they'll have to excuse Lilly, she's a little shy. 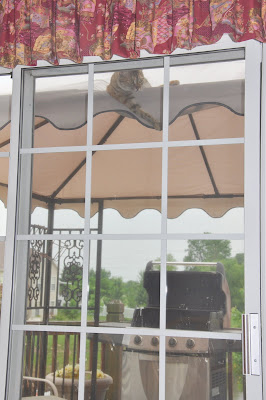 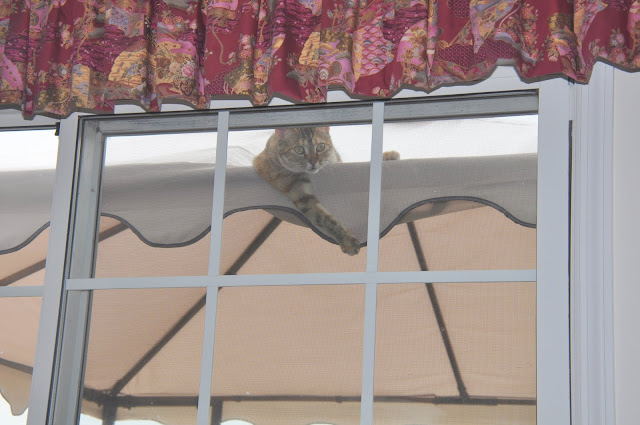 The other day I was talking to John on the phone, looked up and saw Lilly lounging on the top of the canopy covering the deck.  OMG!  I told him he wouldn't believe where Lilly was.  He said he probably would.  He said take pictures, which I did, and emailed them to him at work.

We have a walk-out lower level, so the deck off the kitchen is 12 feet off the ground.  The cats love to go out on the deck.  They walk around on top of the railing, but nobody has ever gone over.  Kittens have to be 3 months old to get on the deck.  It's their favorite place to be.  It's also my favorite place to be - when it's below 75 and above 55 degrees.  Me, my lounge chair, my Kindle, my cats, and a chocolate martini.  Life really doesn't get any better.  Everybody rushes out when I ask, "Anybody want to go outside?"  Of course, getting them back in requires lots of cat treat tossed on the floor with me shouting Cookies! cookies! They're really hating the heat wave we have now.  Nobody gets out there when it's in the 90's. 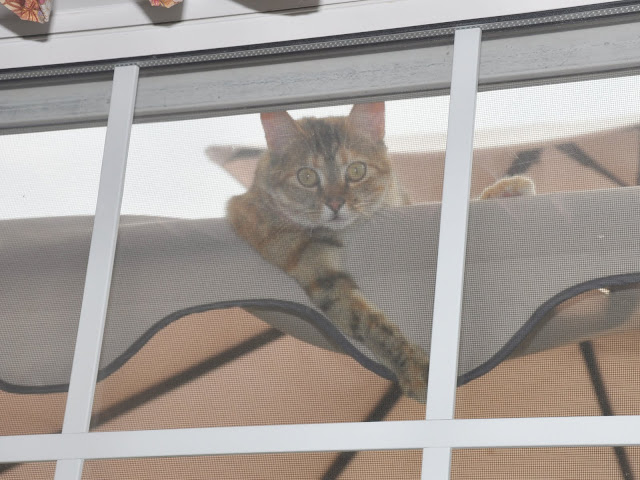 "What?"
I don't know how Lilly got up there, but I didn't want her to try to get down by herself.  She was quite comfortable and had no desire to be anywhere else.  I stood on a kitchen chair and pushed her fat butt up from the underneath of the canopy to get it over the frame.  Like lifting a 10-pound plastic bag of jello.  We've had the frame and canopy about 8 years, and this is the first time a cat has gotten on top of it.
Posted by Barb's Cats and Quilts at 11:18 PM