Last Saturday at Petsmart I was talking to another foster mom, Jen, about a couple problem cats I have.  One, Jilly, is taking up a whole bedroom.  She got along with her sister, Josie, and two kittens, Zack and Cody, who were put in with Josie and Jilly as kittens.  The sisters adopted and cared for Zach and Cody from the time they were about 10 weeks old.  Josie and the kittens have been adopted out, and Jilly is all by herself.  She cried by the door, and I've let her out a few times, but she was so hissy and picked fights, that I had to put her back after 10 minutes or less.

Jen told me about calming collars and how much they helped a couple of her cats get along with other cats.  She even went and got a box of three for me in the store.  Sentry Calming Collar, three for about $32.  Labeled as good behavior pheromone technology, lavender chamomile fragrance.  I bought them and put one on crabby Eva when I got home.  She did seem more relaxed and not as crabby.  The next day, Sunday, I put one on crabby Jilly.  I had started her on the Prozac gel, rubbed in the ear, the day before, but it usually takes two or three weeks to see any effect.  A few hours later I opened Jilly's door.  She slowly came out, walked around, saw other cats and layed on a kitchen chair.  This was eerie.  I went downstairs to check and answer email, and she came down, too, and explored.  She was out, THE FIRST DAY, for six hours!  There were a couple tiffs and hisses, and a couple spats, but nothing serious.  I let them sort it out.

The next day, she was out for 10 hours.  She's been out every day since, and the hissing is getting less each day.  At bedtime, I tell her it's time to go back in her room, and I head upstairs.  She follows me and goes right in.  I give her half a can of food and tell her what a good girl she is.  I didn't think I'd ever be able to let Jilly out in the house, but in one week, she's almost like one of the gang.  To see her free to roam two levels of the house is almost beyond belief when I had her in a bedroom for a year. 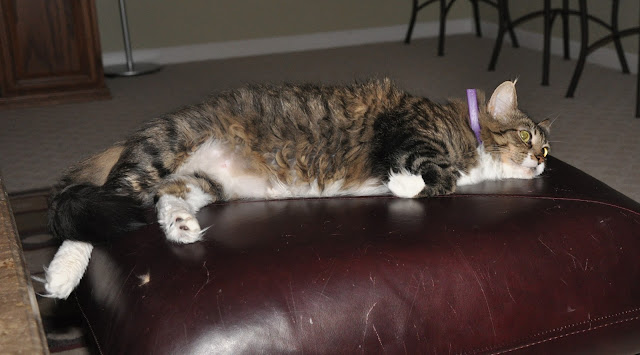 This is Jilly tonight while we're watching TV. She's like a different cat.  I know she looks just this side of comatose here, but she's just relaxing and got up to lay on me a few minutes later.  Last night, when Buster was on me in the recliner, she jumped on John and layed on him for a while.  He couldn't believe it and said, "Look at this!"  About 10 minutes later, with Buster still on my lap, Jilly got off John and jumped up on my recliner and slowly layed across my lower legs, 3" from touching Buster.  I said, "No, look at THIS!"  After about five minutes, Buster didn't think this was good idea, and very slowly got up to leave.  That's when Jilly got up, all hissy and spitty, and chased him up the stairs - using my legs as a launching pad.  Ouch.   All is not perfect, but we're a good 80% there. 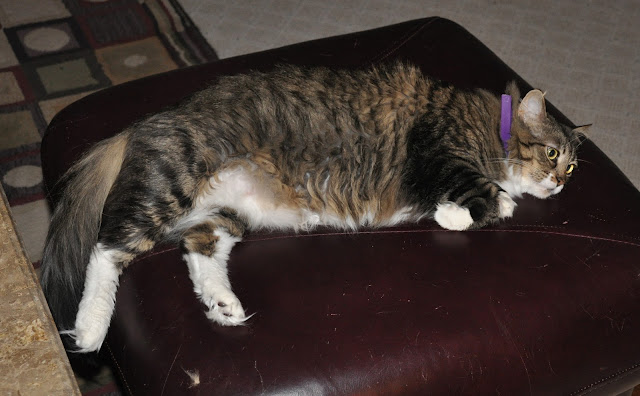 Before the collar, I would take my Kindle in her room every night, sit in a recliner, and try to get her to come up on my lap.  She wouldn't.  I'd pick her up and gently put her on my lap.  She'd never stay longer than two minutes.  Now, she's on my lap for an hour - in the family room - with other cats.

I'm just blown away by this whole thing.  I understand from a little online research that the collars work on most cats, but not on all cats.  Those not affected by catnip are the ones not affected by the collars.  Thankfully, pheromones affect Jilly.
Posted by Barb's Cats and Quilts at 12:05 AM