This is an exerpt from an email I sent another foster  mom when I got home from the vets on Tuesday afternoon.  I saw no reason to retype everything.

Okay, so I was minding my own business at Pet Docs, taking Shari, the snowshoe, to be scanned and tested, and mama Elsa a fecal.  Two teenage girls walked in with a box.  Can the vet's office take the six kittens?  They found the box with the kittens in it by the side of the road by Winfield.  Tiffany and Jessie said they were filled to the max - the storage room and all the kennels were full.  And then they looked at me.  And then I looked at the kittens.  Crap.  They were pretty small.  Some looked like 3 weeks, sickly and scrawny, some like 4 weeks and healthy.  A couple with crusty eyes, but all their ears were clean and no visible fleas.  I said if the techs would test them, I'd take them.   After the girls left, Tiffany and Jessie both said the girls were lying and the kittens were theirs.  I fell for it.

They tested two, and they were negative, but the others were too dehydrated to get a blood sample.  So, I brought them home, Bottle fed everyone, did an hour of power cleaning, put Shari, the snowshoe, in my room, put Elsa and the kittens in Shari's room, and the new kittens in the nursery.   Gave all of them a bath and put them in a tub on the deck, partially in the sun to dry.  After just a few hours, they're like new kittens.  I think they might be two separate litters.

One of the older three.  I think a little boy. 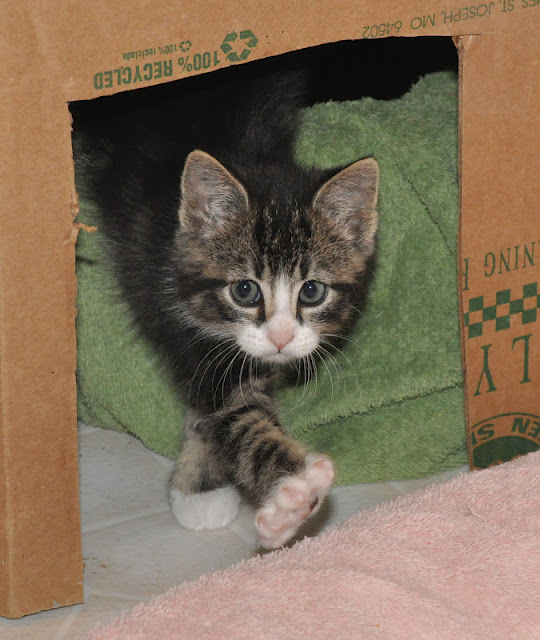 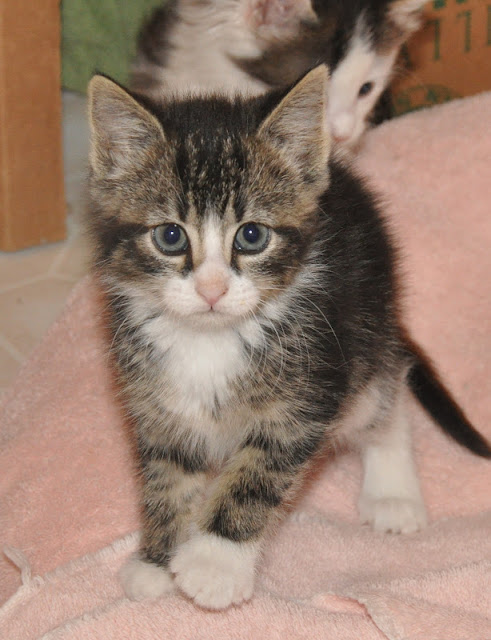 You know how I love the gray tabbies. 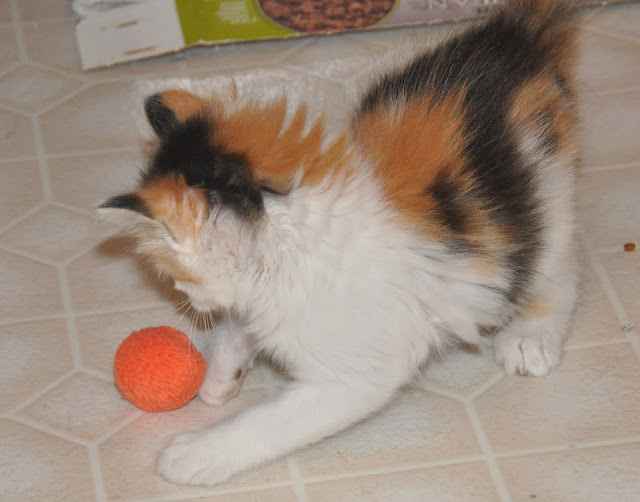 Also an older one, a calico girl. 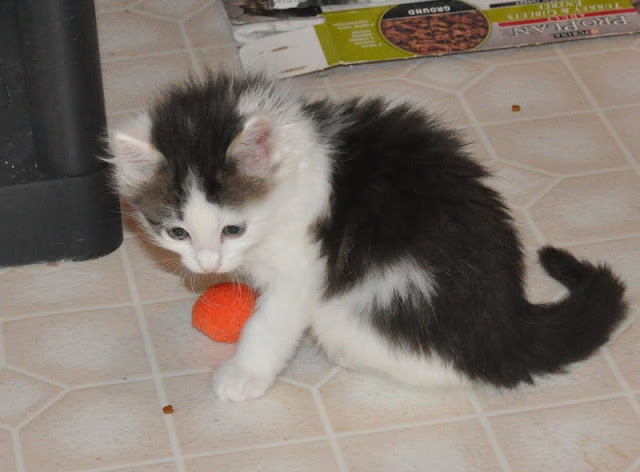 The other older one, and I don't remember if it's a boy or girl. 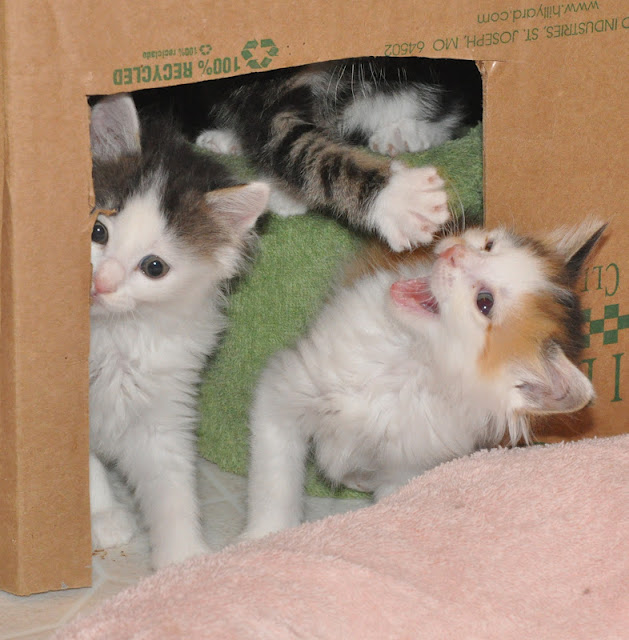 These are all three of the older kittens.

"You wanna keep that paw?" 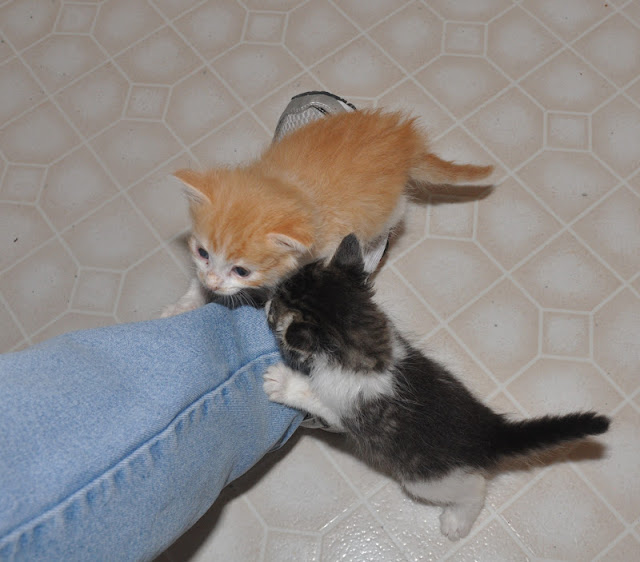 Since I bottle feed the younger three, they all run to me as soon as I come into their room. 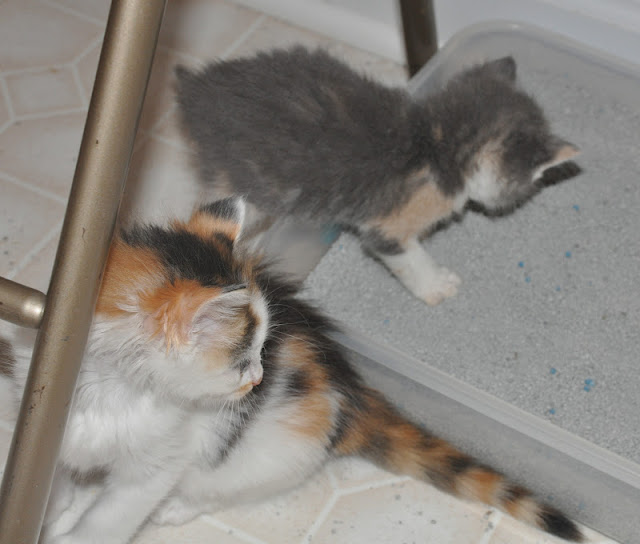 The diluted gray calico is a younger little girl.  A lady and her four-year-old daughter came over today to see Abby, the calico in with the orange kittens.  They played with them for a while and I mentioned I had gotten some younger kittens since I had talked to her and would she like to see them.  Almost as soon as she saw the little dilute calico, she fell in love.  She knows the kitten won't be available for a month, and that's okay.  I said they could visit whenever she liked.


I have 17 kittens 3-10 weeks old.  I'm crazy, I know.  As cute as they are, kittens are pigs.  I've been cleaning so much my hands look like dry shredded paper.  I sweep the nursery in the morning, wipe up spots and smears of poop because they drag their tails through it after they go, then walk around and get it all over the floor, and by evening it looks like I haven't cleaned in a week.  And I get to clean it all over again.  Then, I get to hold and play with these soft little bundles of fur.  They lick my nose and chin and start purring against my neck.  And I don't feel so crazy anymore.