Wednesday night a former foster mom brought over a beautiful calico cat who had just delivered four kittens that afternoon in her barn.  The cat showed up with a group last fall and made themselves at home in Julie's barn.  Far from being feral, she is quite friendly and affectionate, and I've named her Ellie.  One little quirk is that she hisses - a lot.  When I come in the room, when I walk up to the birthing box, when I pull the towel covering it away, and when I reach into the box to pet her.  Okay, now you think I have a death wish, but while she's hissing, she's stretching her head over to my hand so she can rub and rub and rub.  My legs almost went numb tonight kneeling down, bending over and sticking my head in a box to pet this cat.  It's like she didn't want me to leave.  Julie said she's always hissed like that and they just ignore it.  The day after I got her, I had her tested, and she's negative for feline leukemia and aids, so the babies probably are, too.  Yea!  That's one thing we fear about getting feral and barn cats.  She did test positive for roundworms.  It would be more unusual if she didn't have them.  She got a dose of a dewormer, and the babies will get one at two weeks. 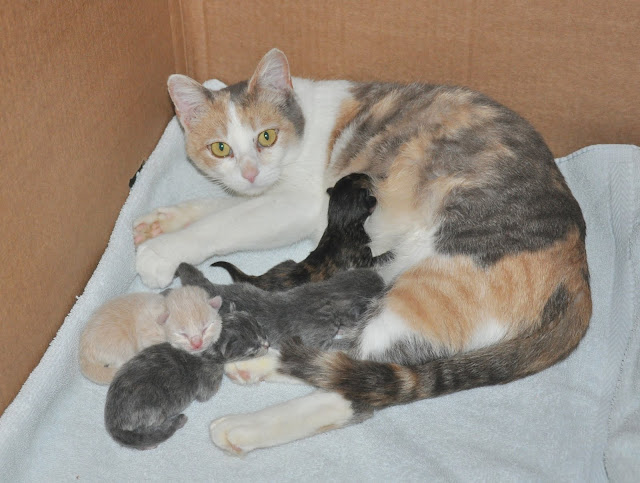 I think the babies are all girls.  The diluted buff, the light one, is my absolute favorite cat color.  To have one dropped in my lap like this is amazing.  She's just so beautiful.  No, I already own three cats, and that's my limit. But, I'm sure she'll get a little extra attention and cuddling before she's adopted. Ellie lets me pick them up, so I'm getting my kitten fix. The kittens are one day old here.  Their eyes will open at about 10 days, so right now, they find mom's milk by smell.  There's a heating pad under the towel.  Kittens can't regulate their body temperature until about three weeks old and need to be kept warm.

I've finally found a good use for ashtrays.  Large ones make wonderful food bowls.  Cats don't like their whiskers to touch the sides of a bowl, but the sides are high enough so food doesn't go over the edge. 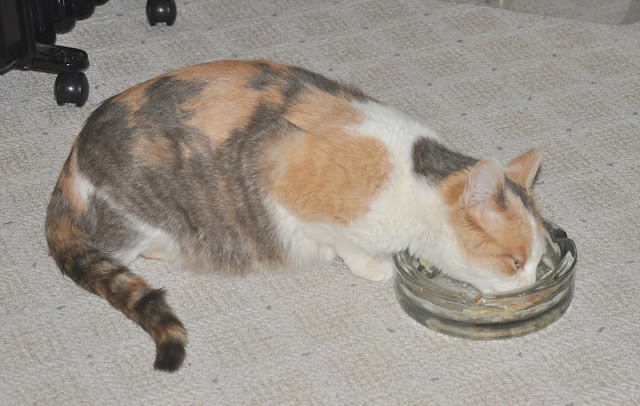 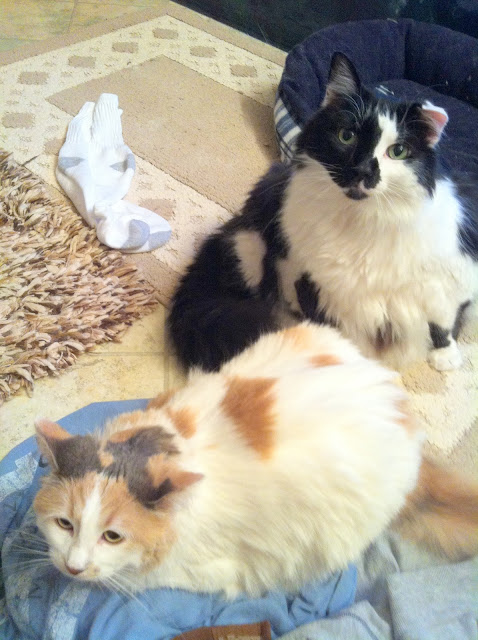 I stole the name Ellie from Barb, who adopted Tracie and renamed her Ellie.  She sent me a picture tonight of their other cat, Zor (top), and Ellie, who have become best friends in a week. Even though cats were friendly and got along with others at my house, doesn't mean they'll get along with cats at an adopter's house. Usually, they're just fine, like these two, but we never know.  Warms your heart.  Thank you, Barb, for adopting my little girl.
Posted by Barb's Cats and Quilts at 12:57 AM