Queen of the Washer Toss

Nothing much happened today.  No babies came.  I read a lot.  So, I'll tell about last Friday night.  My dear friend, Madeline, who lives a couple hours away, came up to St. Charles to a patio party her daughter was giving to christen said new patio.  Just family and a few friends, and I was happy to be invited.  There was a washer toss game set up in the yard and grandson, Isaiah was playing against his father, Levaughn.  When they were finished, Madeline and I played each other and I won.  Now I haven't played this game except once about six years ago.  Then I played against Levaughn and beat him. By this time it's past dusk and there's no yard lights.  Isaiah was holding a flashlight on the boxes so we could have something to aim at, and he and his sister were arguing about who would hold the flashlight to search for the washers when we couldn't find them in the yard. We had a rematch, and I beat him again.  In one round, three of my four washers were in the box and the fourth was in the center pipe.  Six points! The crowd went wild!!!  Well, Madeline clapped for me.  I retired undefeated. It was awesome.  I am proclaiming myself Queen of the Washer Toss. The old lady was cleaning up.  Mopping the floor with them.  No, I'm not a gracious winner.  I AM a good tosser, though.  It comes from 40 years of marriage and tossing things into the trash cans, into the laundry, into the drawer.  I can toss John's PJ pants onto the 12" of shelf space above my head, from five feet away, and nail it every time. Overhand, underhand, sideways, it doesn't matter.  I couldn't play basketball in grade school or high school worth a darn, but I could stand at the free-throw line and toss the ball backwards and hit nothin' but net. A thing of beauty. I guess I could look in the garage for a 3" washer to photograph, but I don't think we have any that large.  I do think I'll get one of the games and see if my next victims guests would like to make a friendly wager.  I could start playing for cat food.  I'm already quilting for cat food. To all my Tuesday and Wed girls:  practice up and we'll have the hubby's over for burgers and washer toss.  I need more cat food.

Madeline's been wonderful about including me in many of their family events.  She has three daughters who live in the St. Louis area, so she's up here quite a bit and tries to come out to O'Fallon when she can.  About a year and a half ago she brought her two grandkids, Isaiah and Bria with her to see the kittens.  They had a ball and the kittens cooperated and were fun.  This is Isaiah with a feather stick keeping two litters of kittens mesmerized. That's Madeline in the chair. 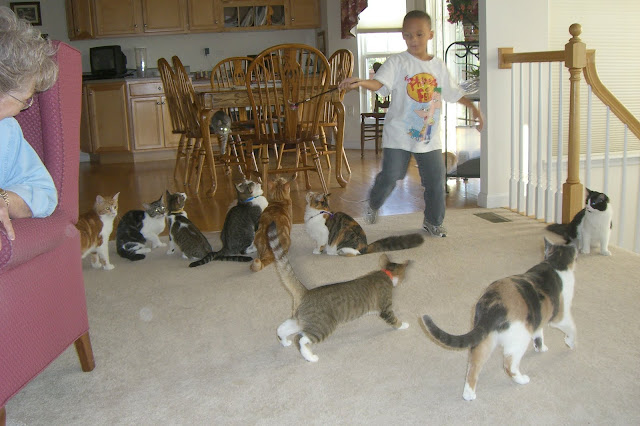 Isaiah is the cat whisperer.  "Okay, lets do the Meow Mix song again, Tony, and you try to keep up with the rest of them? 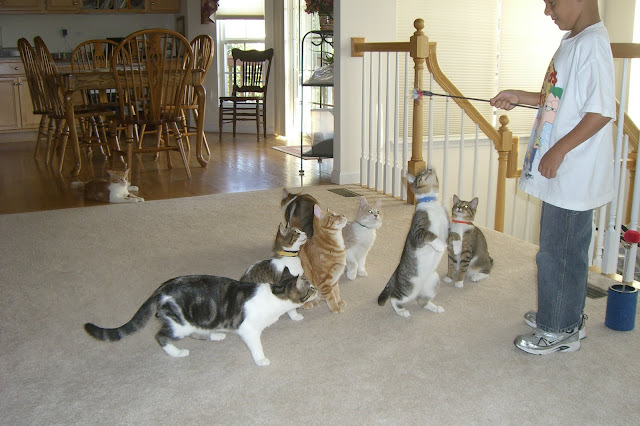 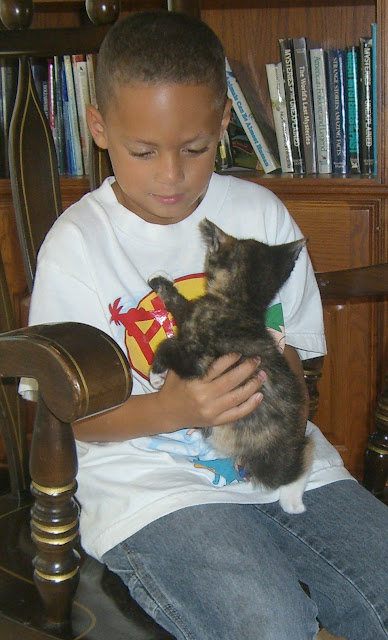 Isaiah with a new friend.  I don't even remember the kittens name.  This would be about the part of the day that Isaiah's eyes started to water, and his throat started to close in,and we decided he was allergic to cats.  I'm trying to find a children's antihistamine dated after 1988.  Gave him half an adult pill and it worked pretty fast.  What helped most was when they left my house.  He was fine when he got home.  So Isaiah is allergic to cats and kittens.  He also said he'd tough-it-out and come anyway.  We'll see what mom has to say.
Isaiah and Bria are two of the most beautiful children I know. Both will be in the movies.   She will be the "New Halle Berry" and he'll be a martial arts guy who single handedly saves the world from a catastrophe.  They're both great kids.  Isn't she stunning. I don't envy her parents in 10 years. Not at all.  Nancy, Levaughn, you have my sympathy.  It's going to get brutal. 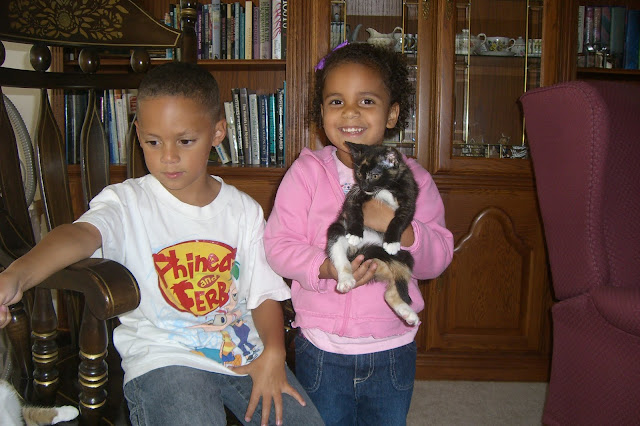