This is Minnie Tuesday morning.  She's resting her leg on something John made for me to allow a bedroom door to open only a couple inches so cats on either side of the door can get acquainted before letting them together.  I'd been holding her leg up to give her more room and my arm got really tired.  I saw this door stop on the supply shelf and it worked like a charm as a leg rest.  She used it off and on for hours. 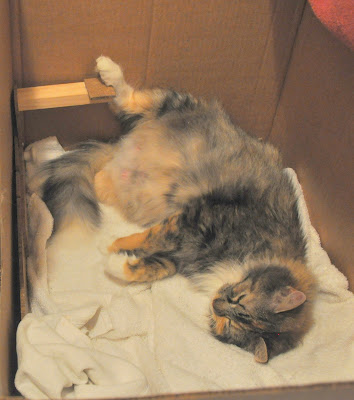 Minnie started contractions Tuesday at 12:30 pm, just the time I was supposed to be leaving for a quilt guild meeting.  I love my Tuesday group and don't miss a monthly meeting unless I absolutely have to.  Kittens are one of the few reasons to miss a meeting.  She had her first kitten at 1:15, then the second one at 1:30.  Boy, this is going to be a piece of cake.  Then they got further and further apart.  Number 5 was born at 7pm, and I sat on a folding chair, next to the birthing box, holding a flashlight on her butt, just like I'd done for a major part of four days, waiting for these kittens to come.  I don't think I was this exhausted after I gave birth to my daughter.  After the fifth kitten, Minnie stopped acting like there was another one coming, but the vet, Kelly, had seen six skulls on the x-ray.  After 9pm I changed the towels in the box and cleaned her up a little while the five kittens nursed - or tried to.  They weren't very good at it in the beginning.  The poor little sixth one was stillborn about 11pm.  For some reason we'll never know, he just wouldn't come out.  The others are doing very well and all gained a third of an ounce between midnight and 9am this morning.  It doesn't sound like much, but when you only weigh 3.8 oz, that's a 7% weight gain in nine hours. 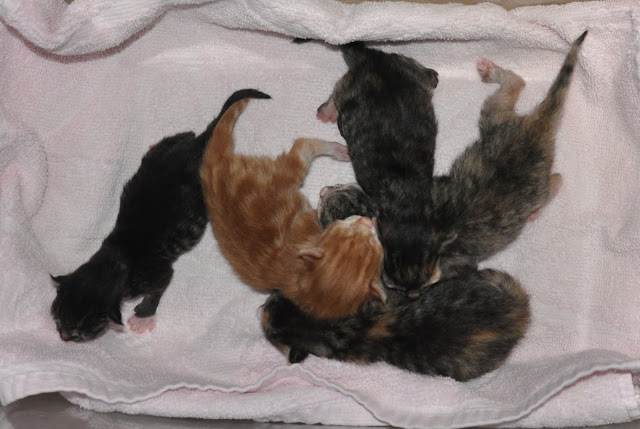 There are two darker gray, two medium gray with slight orange blotches, and one orange that has the classic tabby swirl on each side.  Several have white feet.  Minnie and the babies are all doing very, very well.  I'll weigh them on a digital scale every morning to make sure everybody is gaining weight.  Whew!  I'm sure Minnie's as happy as I am to have this over with.  She was huge, but she could still jump up on a bed to cuddle. 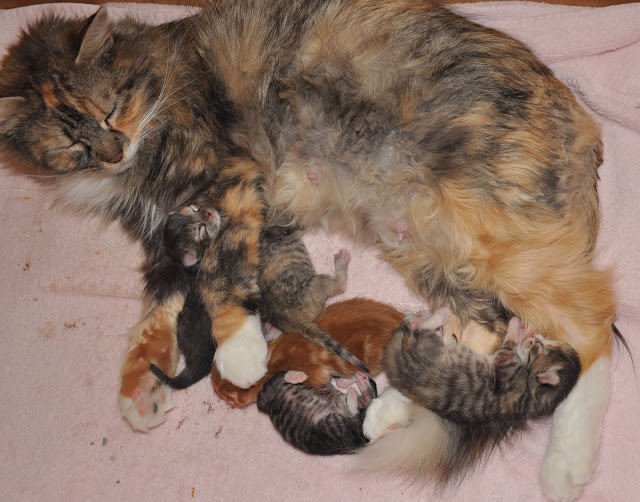 This photo was taken tonight, so they're one day old.  It's a little hard to see everybody, and Minnie's looking a little rough around the edges. There's two kittens by Minnie's front legs.  One's head is under her fur.  Minnie has her paw on the orange one's head.  One gray has it's head in the orange one's neck and the other gray is laying across Minnie's back legs.  None of these positions look comfortable to me. I had trimmed some of her fur around the nipples so the babies could find them easier, but their tiny toenails were still getting caught in her hair, and Minnie was not liking that at all.  She actually let me use a noisy battery-powered mustache trimmer to shave around each nipple and trim most of her belly fur, too.  What a girl.
Posted by Barb's Cats and Quilts at 11:55 PM