Annabelle And Her Kittens

Another foster mom, Julie, took in a mom and her four babies last week.  She named the mom Annabelle.  The shelter had an orphan kitten just a few days older than Annabelle's kittens and put it with them to see if Annabelle would accept it, and she did.  Julie sent a great photo tonight of the family. 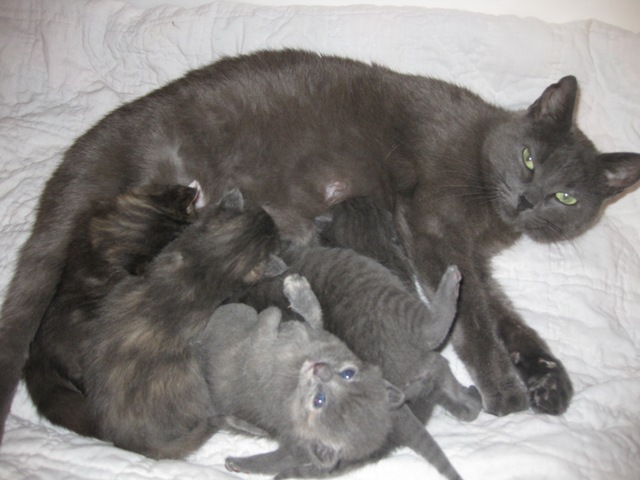 Annabelle and her kittens - plus one.

From the left are:

Cassie  (she is an orphan that was placed with mama)

Bree
Delilah  (she's the one looking up)
Cameron  (I think he's a boy, if not, her name will be Cammie)
Devon  (aka - Tank, he's the largest one)
Julie is loving having the kittens.  We all do.  How can you not love the kittens.  I told Julie that I'm a sucker for the Russian Blue type, which would be Delilah, the lighter gray one on her back.  I loaned Julie a digital scale, and she reported that they are all gaining weight every day.  These cuties are about three weeks old.  Our kittens can be adopted just after they're nine weeks old.  So, you all have five to six weeks to pick a couple of Elsa's or Annabelle's kittens.  Order early and beat the rush.
Posted by Barb's Cats and Quilts at 12:05 AM