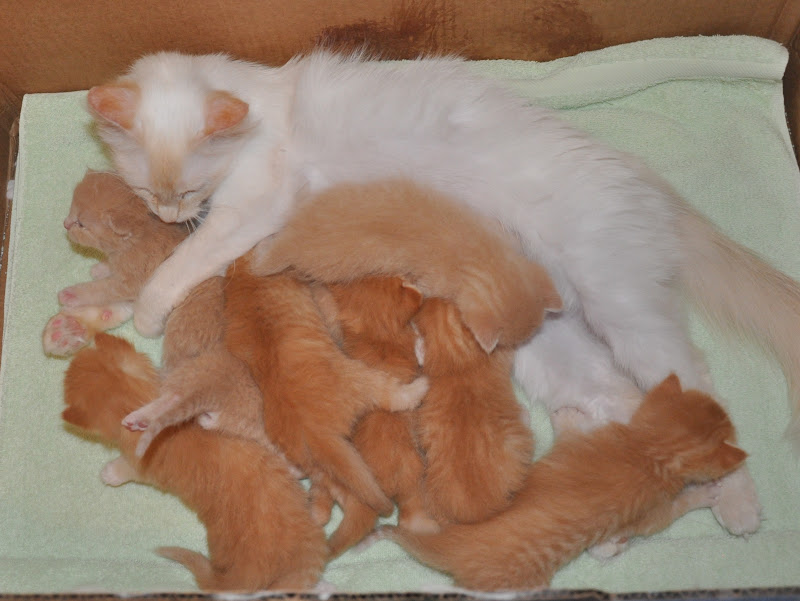 Elsa's kittens were three weeks old Monday.  They're playing, romping, and exploring.  Last night I let them out of the birthing box that's been their only home for their entire lives.

First, the requisite mama-nursing photo.  The kittens are outgrowing their box and need to be out in the closet running around.  I'll cut the door all the way to the floor tomorrow.

Cheri still says the five darker ones are girls and the three buff are boys.  Usually about 85% of orange cats are boys and 15% are girls.  It's rare to have a cat give birth to eight kittens, and to have all of them the same color, and 60% of an orange litter be girls is very, very rare, indeed.  Four times more than the average.  I'm honored to be a part of it.  And the best is yet to come.  In another two to three weeks, they'll be let out in the bedroom where they have the carpet for better traction. They'll be running, jumping, wrestling, and providing me with thousands of photo ops. Mama giving one of the boys a bath.

I'm sorry most of these photos are slightly out of focus.  The lighting isn't the best in a closet.  Even though the camera was set on auto, it focused in front of what I wanted.  They'd be a lot sharper if I didn't crop them down to a smaller section, too.

There's 19 photos here, but I couldn't delete any.  I took 93 in the past two days, so this is just a small part of them.

I've been marking different paws with a red marker to identify them, but it doesn't last more than a couple days.  The colored velcro collars will go on tomorrow. 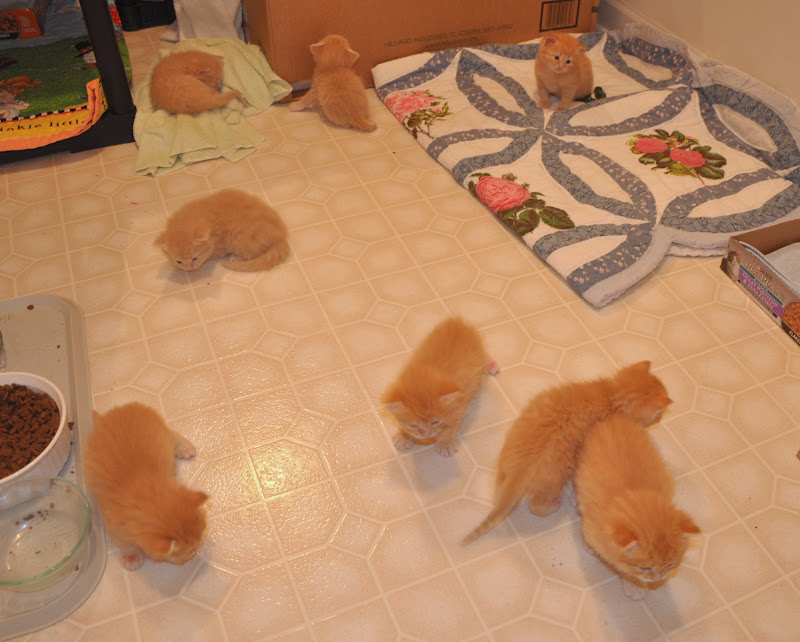 All the kittens are on an antibiotic for sniffles and eye goobers.  As I gave each one their dose last night, I put them outside the box.  I had cleaned the bottom shelves, cleaned the floor, and put quilts down for them on the shelves and floor.  They were confused and stayed huddled together for a while, then gradually wandered off to explore.  Mom was there, so that was reassuring. I didn't leave them out because I didn't have a small litter pan ready, and it was late and I didn't want to start litter training.  They're still a few days too young, anyway. 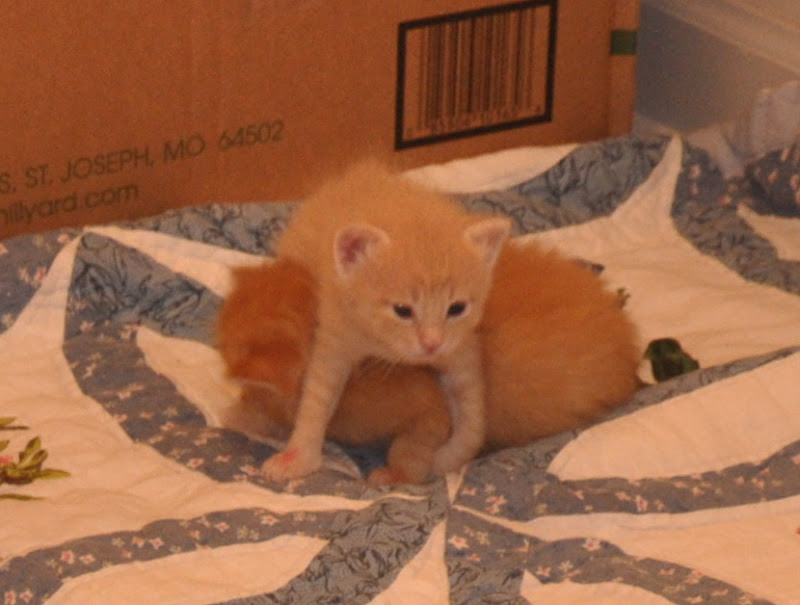 Obstacles are not a problem.  On top is the buff Front Right.  None have real names yet. There are buff and orange front lefts, front rights, and a back left or right.  Paperwork is in their room and I'm not.  The oranges also have Front Front and Back Back. 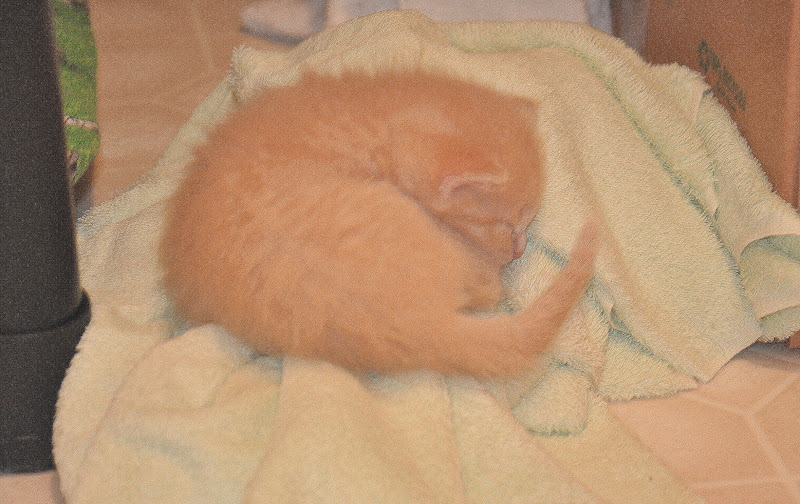 After they were all out of the box, I changed the towel and put the old one on the floor till I left the room.  Someone thought it made an excellent bed. 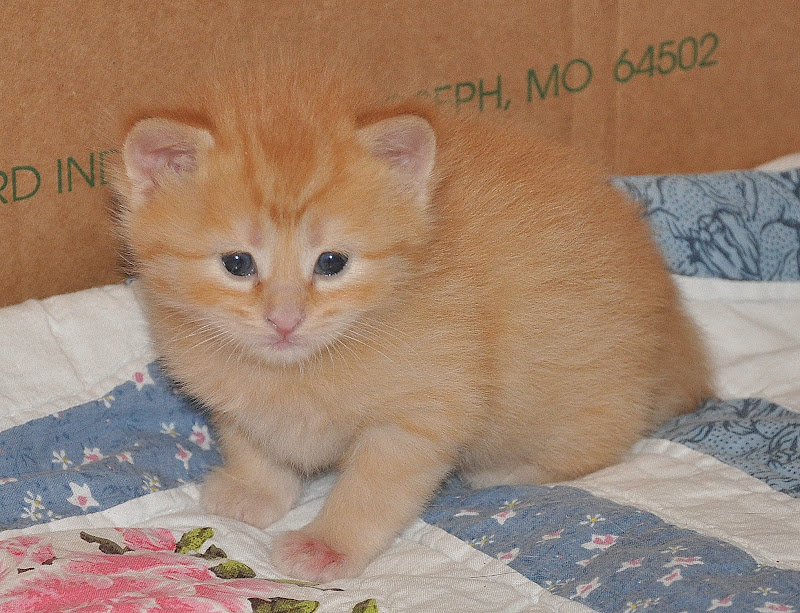 Even out of focus, she's still adorable.  This is the orange Front Left. 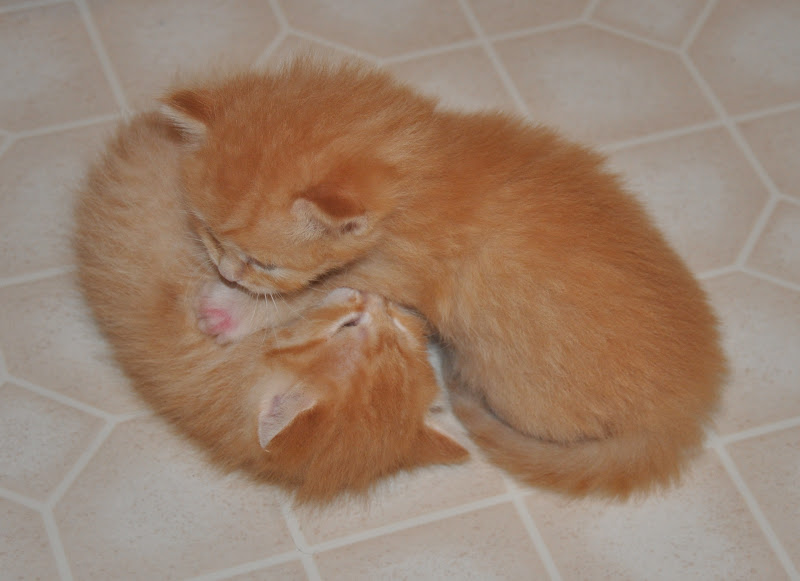 One of the five orange girls is slightly larger and has slightly longer fur.  That could be her on the right.  This is either Front Left or Front Front.  The other four are identical.  I can't see any markings to distinguish them from each other.  No spots, no larger stripes, no whorls - nothing. 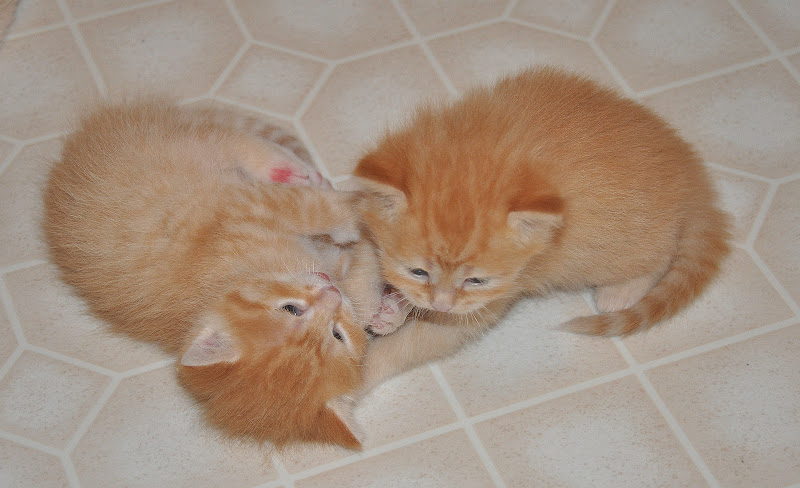 The one on the left is either Back Left or Back Back. 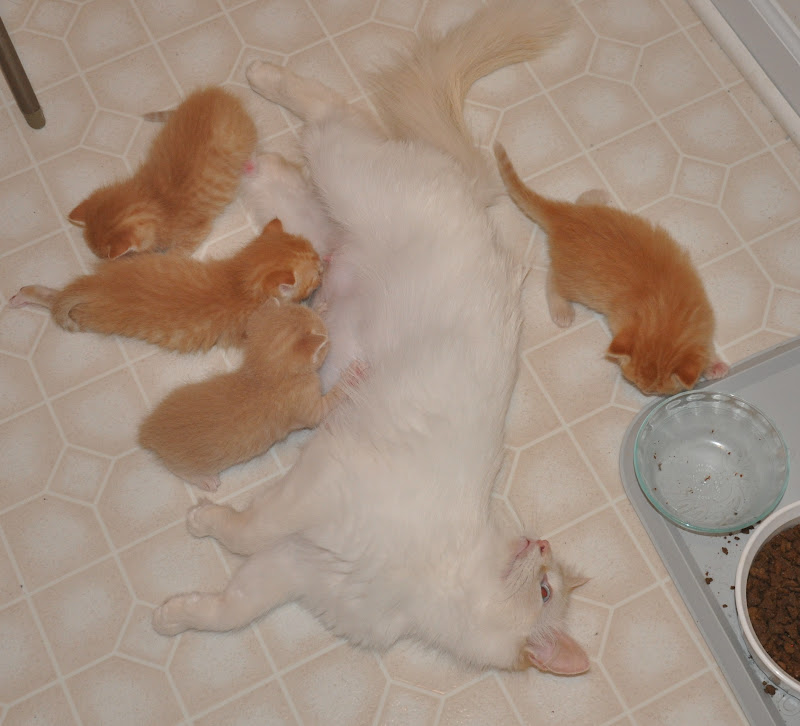 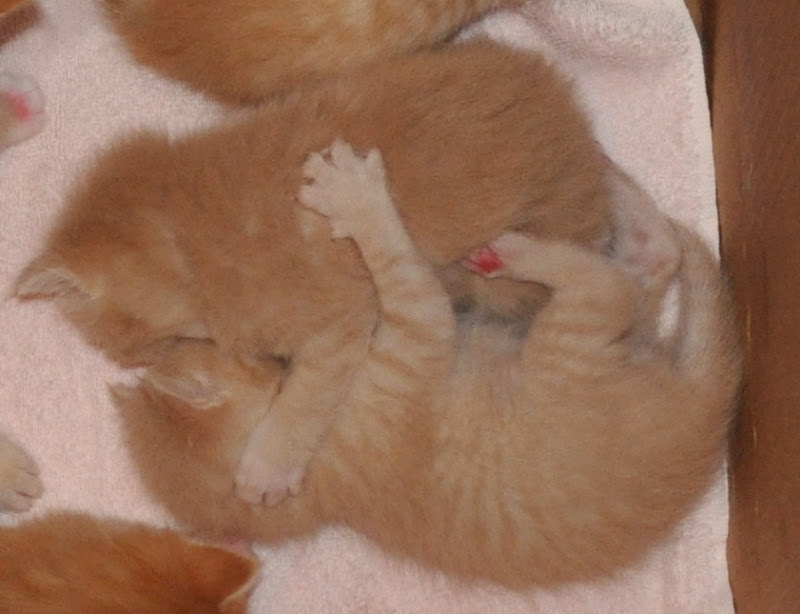 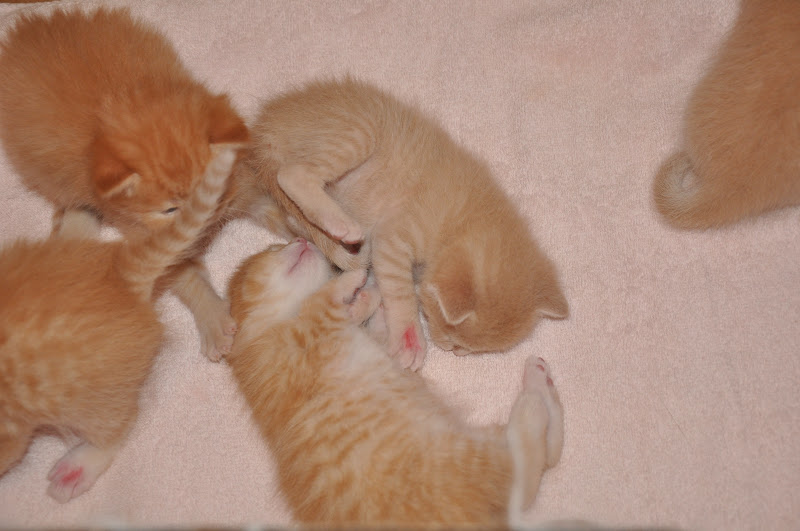 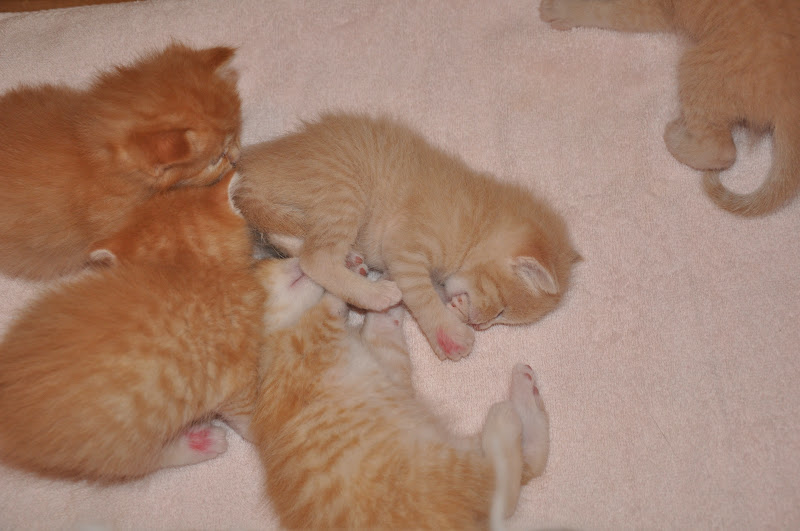 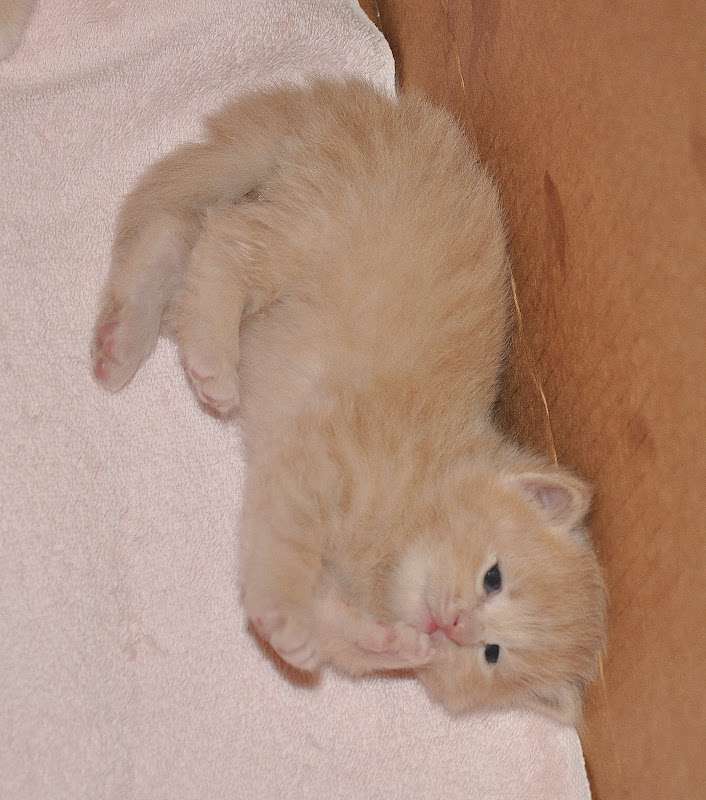 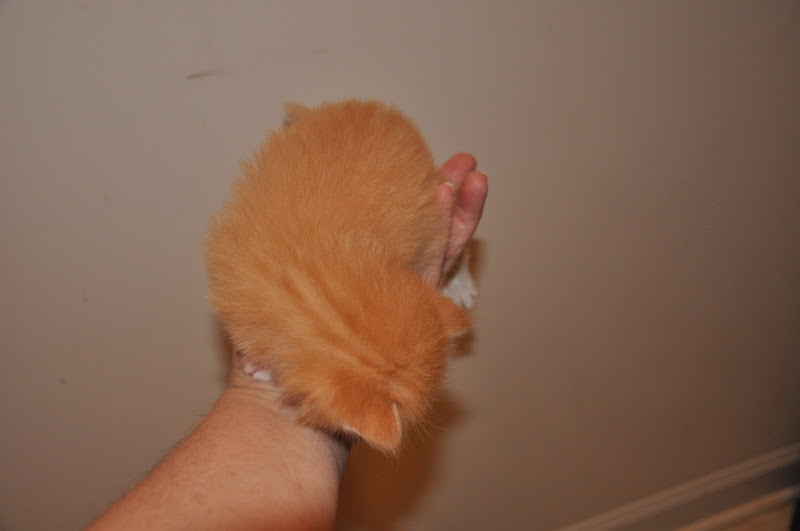 Last week I said in another week the kittens wouldn't fit in my hand. 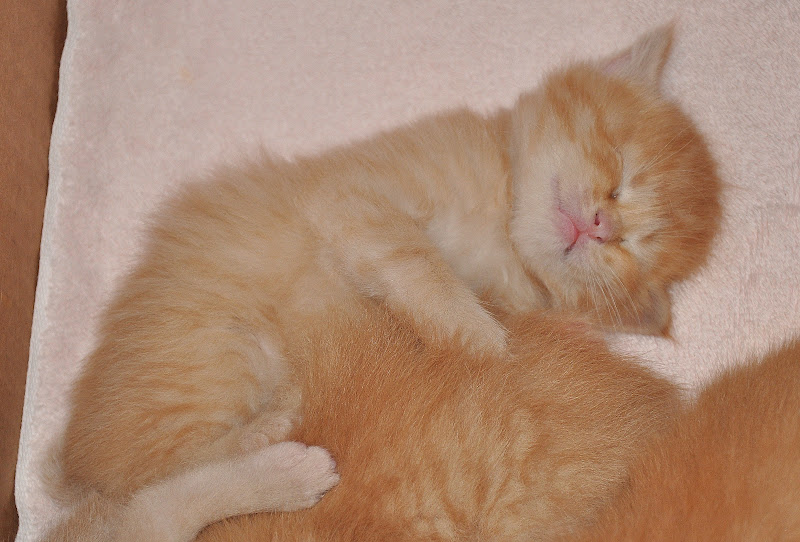 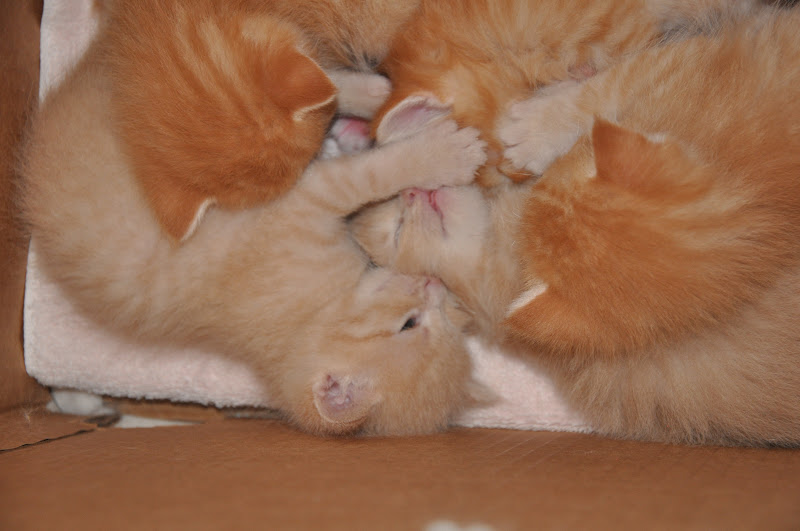 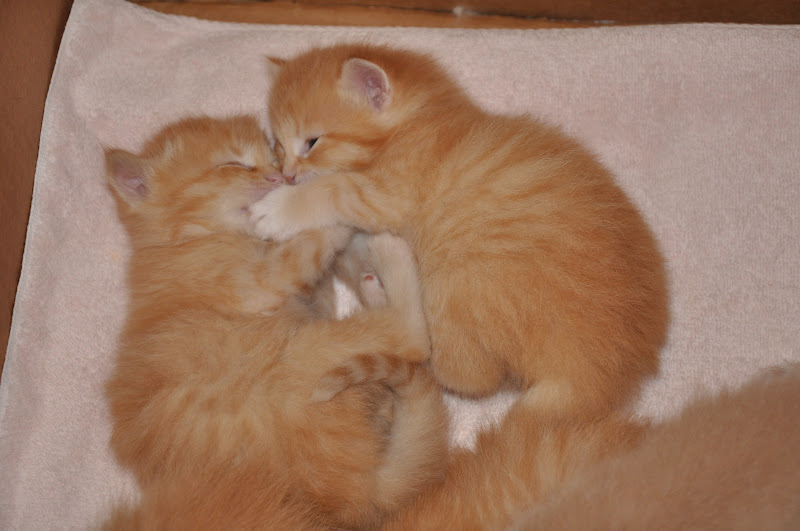 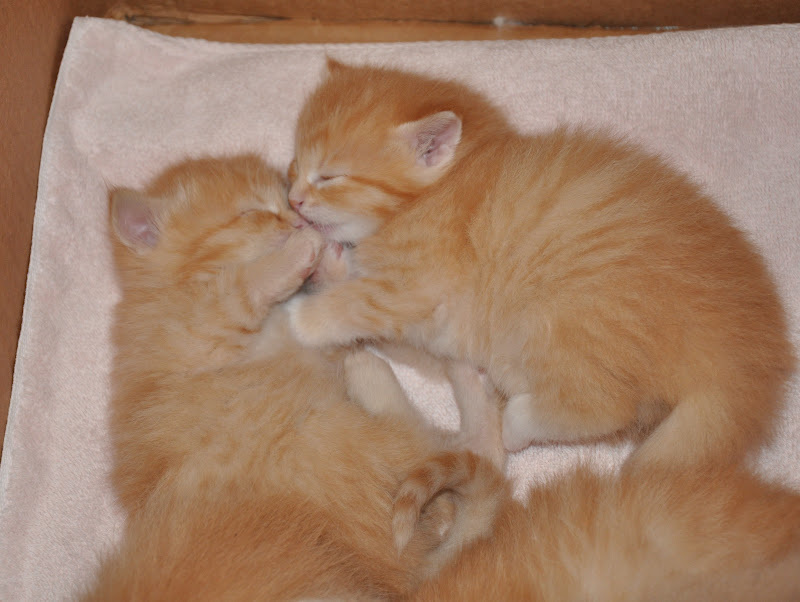 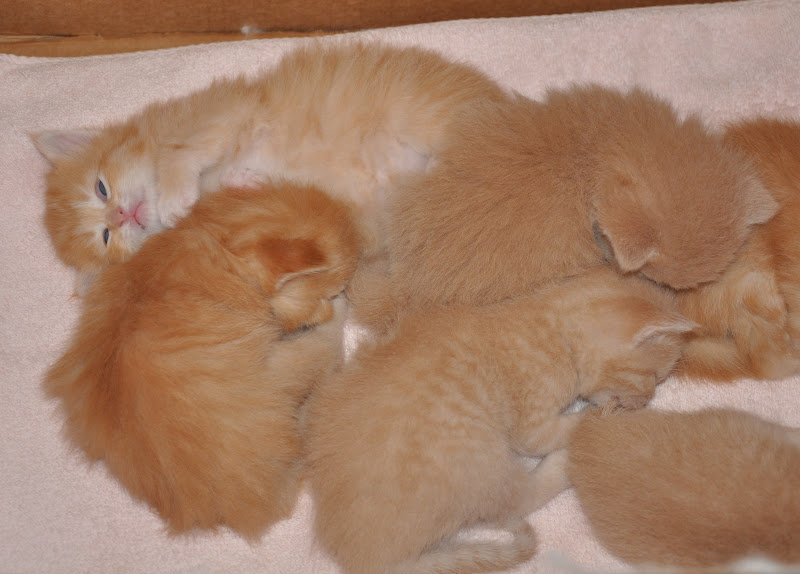 Are you in a coma, yet?  I wish you could all see these guys in person.  It's just beyond words how cute they are.  Am I lucky or what?  One of those hardest jobs you'll ever love.
Posted by Barb's Cats and Quilts at 11:41 PM