My husband has become quite the bread maker the past couple years.  He has several recipes that are our favorites.  One is called Japanese Milk Bread.  Thankfully, he didn't let the name deter him from making it.  It's a soft bread, and I love soft marshmallow bread.  No hard crust. 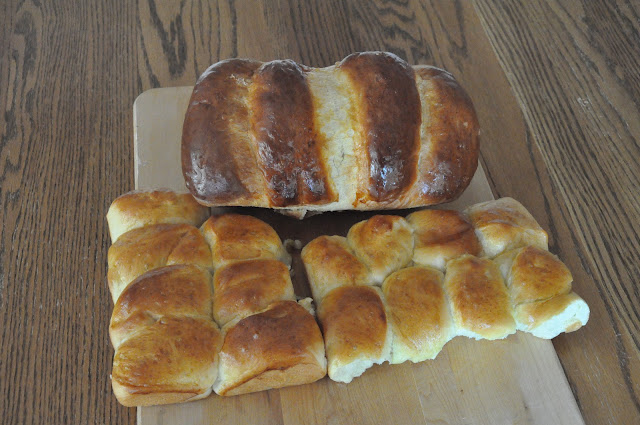 This time he made rolls with half the dough.  You'll notice one roll is missing.  I didn't know he wanted to take a picture of them!  It was worth it.  They taste like the Hawaiian rolls in the orange package at the grocery store, but less sweet and much better.  He said the secret for a soft bread is to make a flour and water paste, boil it, and add it to the bread flour.

I didn't have to eat all of this bread myself.  John took the big loaf to the office for a patient who was coming in that day and likes homemade bread.

My other favorite John makes is called Honey Oatmeal Bread from Father Dom's cookbook.  It's online if you Google it.  A very hearty (and soft) bread.  Father Dom is a friar at a monastery somewhere in Illinois, I think.  He's the head baker and has published a cookbook.

P.S.  I thought I posted this a few days ago, but found it listed as a draft.  The rolls are now gone.  I had a couple pounds of hamburger that I made little sliders with and used the rolls as buns.  A slice of cheese and some of my onion jam - fabulous.
Posted by Barb's Cats and Quilts at 12:05 AM