I've named the two gray kittens from Troy Micky and Davy, my favorite members of the Monkees.  Major teen crushes.  Yes, I'm that old.  For those of you under 45 or so, the Monkees were the new Beatles from the late 60's.  Micky Dolenz and Davy Jones were soooo cute, and their voices soooo cool.  Anyway, you get the idea.  These kittens are just as cute, and so personable.  They're perfect.

I think this is Davy, the smaller one. Can't you tell how proud he is of his kill?  It's really hard to tell them apart unless they're side by side. I put little velcro collars on them to tell them apart.  Micky has a green one and Davy has an orange one. 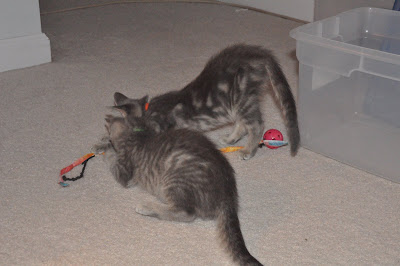 They love to play with toys like typical kittens.  I could watch them all day long. 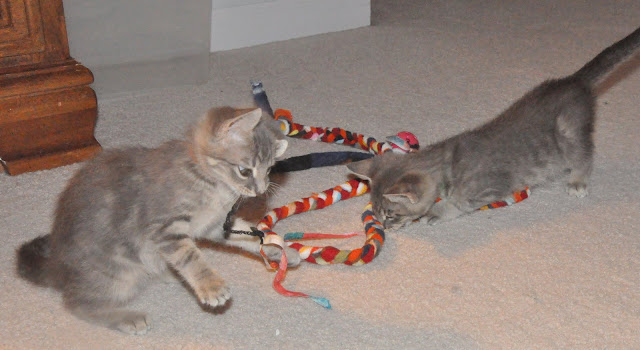 Davy on the left and Micky on the right in all three photos. 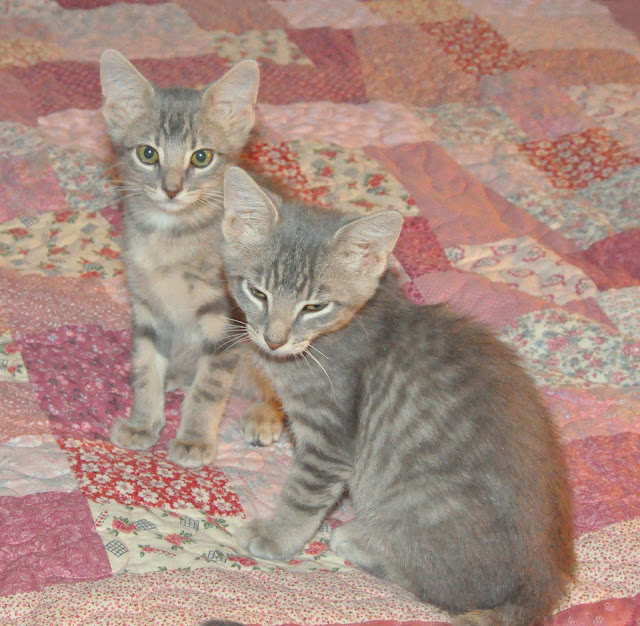 A friend of mine, Val Studer, owns Patches Place quilt shop in LaMonte, Mo, and is as big a Monkees fan as I am.  We would see each other at the fall state retreat (back before I was overrun with cats and could get away for a weekend) and talk about them like we actually knew them, except she actually has met them and had her picture taken with them  - although I haven't actually seen it.  Way back when, she was traveling and was in an airport in, I think, Connecticut, and there they were.  Just sitting there waiting on their flight.  No entourage, or "people," just the four of them.  She had a camera and they happily had someone take their picture - with Val!  I'm so jealous. The closest I've gotten is to a concert in '66 or '67.  My dad, bless his heart, took my sister and me.  He sat there for several hours amid thousands of screaming teenage girls. My best concert, ever. Val said she had some pictures of Davy and would dig one up for me.

A year or so later, I taught a quilt class for the Warrensburg quilt guild. I knew Val was taking the class.  A half dozen guild members and I were sitting at some outdoor tables before class when Val drove up.  When she got out of her car, I saw she had a manila envelope.  I hollered that that better be for me.  She hollered that it was.  The other people were confused and I'm sure thought me very rude.  It was an 8x10 or larger picture of Davy Jones, and I'm sure I didn't scream or anything.  I can't find my keys sometimes, but I know right where that picture is.  Thank you, Val.
Posted by Barb's Cats and Quilts at 11:10 PM