I'm packing today for my 3-day quilt retreat starting tomorrow.  I'll be a whole 30 minutes away at a conference center, but it will be out in the middle of nowhere as far as we're concerned.  We get fed three times a day, but everybody brings something for the snack table in our meeting room.  About ten of us will be in a very large well-lit meeting room.  We each get a 6' table and set up our sewing machines, irons, cutting mats and sew on our own projects.  My contribution last year was chocolate-covered cherry jello shots.  The others said I could do that again this year.  I just did one batch last year, but made a double batch this year. The recipe is at the end. 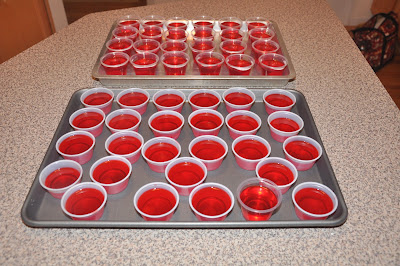 I wanted larger cups, but waited until yesterday to get them and had to take what the stores had. Got two kinds from two different grocery stores.  The first store only had 50 and I didn't know how much I would get from one batch, so I got a package of 25 from the other store.

I put a maraschino cherry in each cup and filled them with the jello mix to within 1/2" to 3/8" from the top.  Had to leave room for the chocolate and whipped cream.  I put the cups on two cookie sheets and into the fridge to set. 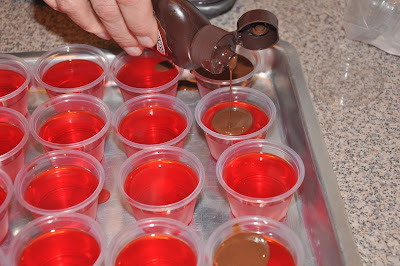 After a couple hours they were ready for the squeeze chocolate topping that hardens when it gets cold.  Have the chocolate at room temp when you squeeze it on.  I used about 1/8" of chocolate for each one.  There's not much in a bottle.  I bought two bottles, but I didn't know how far each would go.  Turns out I came out perfect down to the last cup.  I do stuff like that a lot with numbers and amounts.  Like grab the exact number of papers/rubber bands/whatever that I need.  Open a book to the exact page.  I can guess what numbers people are about to say when they're talking - even on TV.  Works with everything except the lottery!  Once at a party, we could put $1 in a pot and guess the weight of one of the guys.  I wrote down 309 lbs.  Right on the nose.  I made about $16. 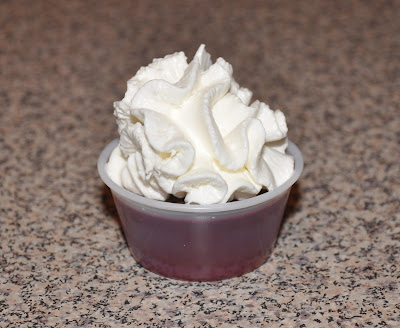 You probably don't need quite this much whipped cream.  It was the first out of the can and came out faster than I thought..... 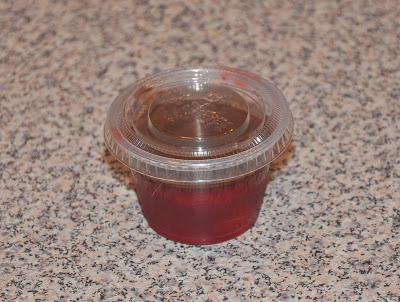 Since the whipped cream can't go on now, I'm taking the can with me to the retreat.  All cups got a lid and went into some plastic bags. 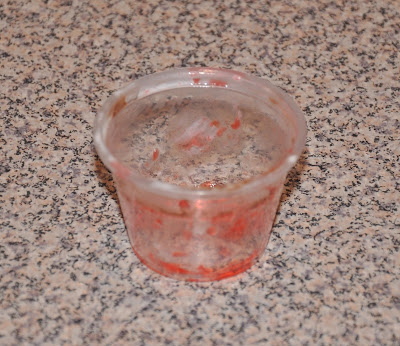 As a very conscientious person, I needed do a taste test to make sure I didn't poison anyone. The cups are so small, and I wasn't sure they were acceptable, so I had a second.  They still didn't taste right, so I sampled a third.  Okay, they'd do.  Maybe the others won't like them and I'll have to bring them all back home.  What a shame. 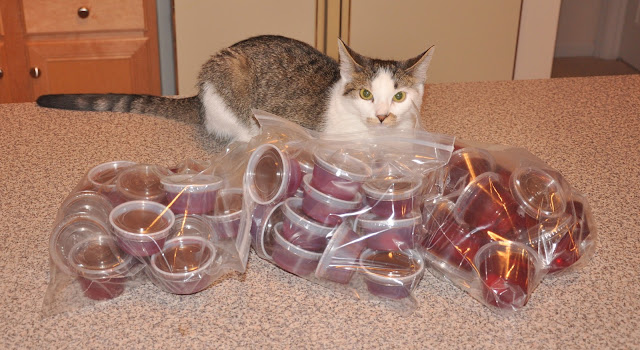 Aster really wanted to sample, too, but she was too late.

Mix the jello with the boiling water like usual.  Add the two cups of liquor that takes the place of the cold water.  Some recipes say to let the jello cool to room temp, then add the liquor.  Whatever.  Put one cherry in each cup and fill to within 1/2" to 3/8" of the top.  I dipped a measuring cup in the bowl to pour the jello in the cups.  Refrigerate for a couple hours.  Top with about 1/8" of the chocolate syrup and put the lids on.  Refrigerate until used.

Note:  A 10 oz. jar of maraschino cherries has about 44 cherries.  This recipe will make about 24-27 shots the size shown here.  I made a double recipe and got 51 shots. Including samples. Since I used the whole jar of cherries, I mixed the cherry juice in, too.
Posted by Barb's Cats and Quilts at 10:00 PM