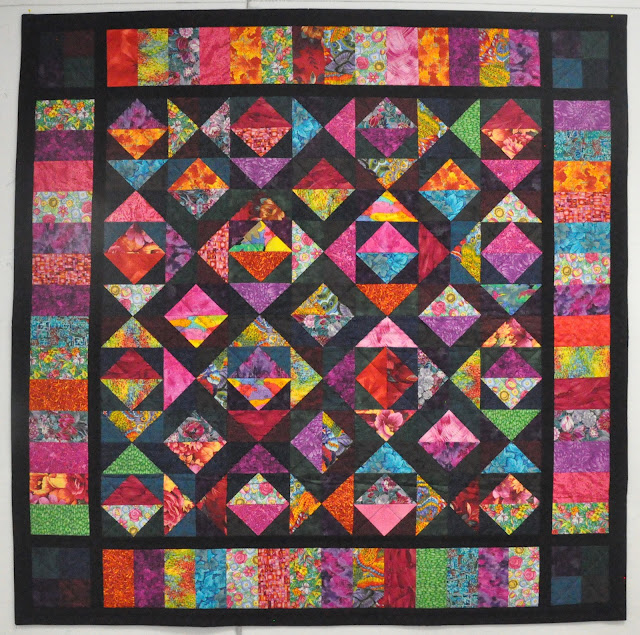 One of the quilt guilds I'm in had a challenge this fall and it was due last Wednesday at our monthly meeting.  The challenge was to make a quilt, wallhanging, bag, or purse with colors of your initials.  Mine are BB.  I happened to be working on a small quilt with every color of the rainbow, as a lot of my quilts are.  I used black, burgundy and blue.  Since it's my quilt, and I can do anything I want, I can also rename the colors.  So, I also used, bink, breen, borange, byellow, and burple.  Spell check is going crazy.

The block is called a flying geese block.  It represents a goose or flock of geese flying in a V formation.  It's traditionally made by sewing two smaller triangles (the blues) onto one large triangle (the orange/goose) and involves sewing two seams.  I was watching a quilt show online where Ricky Tims was doing a demo on a one-seam flying geese block.  Knowing that was impossible, I was intrigued. 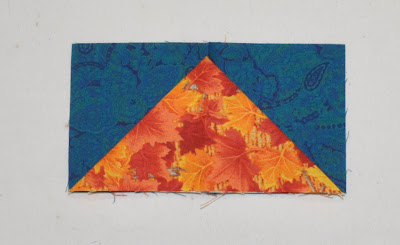 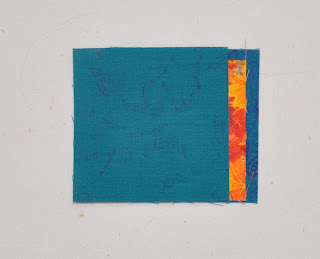 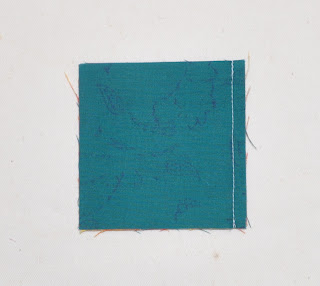 This is a sewn block.  One seam, just like Ricky said. 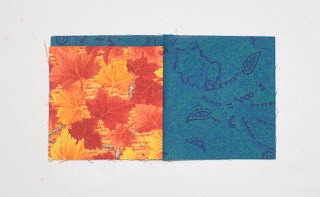 When you open it up, it looks like this.  I pressed the seam open as much as I could to distribute the bulk. 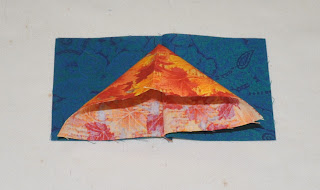 The goose is dimensional, with the sides and points loose.  I used the crease I previously made on the goose to line up with the seam when I pressed it.  I made sure the points were straight and pressed on the diagonal.  They were fun to make, so I naturally cut 800 or so pieces of each.

I played with the blocks on my design wall and got a pattern I liked.  I didn't want the traditional geese all flying in the same direction.  When it was time to sew the blocks together, I realized the points needed to be secured first.  I ended up gluing each point to the background with as little glue as I could get by with.  What a pain in the butt.  No chance of making a king-size quilt with these.  I made just enough to make the nine large black square patterns.  I used some of the leftover geese to make a piano-key border.  The corners are four background squares.  The border needed to be separated from the quilt and black was the only logical choice.  It really makes the colors pop.  The black outer border is a very wide binding.

I couldn't put this on my HQ frame because the foot would get caught in the loose edges of the geese, and there's some serious bulk in the intersections of the seams.  So, at dusk, the night before it's due, I'm out in front of the house with a sheet spread out on the driveway, basting my quilt together with the basting spray.  John even came out and helped hold corners while I smoothed the fabric out.  This was my first manual spray basting in several years.

The only safe way of quilting it was diagonal lines with my walking foot.  I used a serpentine stitch on the loose sides of the geese and it worked well.  I finished the binding at 2:30am.  I'm naming it Thank God It's Finished No. 38.  I like to try new techniques, but I don't always care for them, so I have a lot of quilts with this same name.  I loved making the blocks, but nothing after that until it was done.  I love the look, but would make the traditional geese next time.  Sorry, Ricky.
Posted by Barb's Cats and Quilts at 12:22 AM