Invasion of the Giant Sock Monkey

It's well know in the guild that I dislike sock monkeys.  Dislike is probably too kind of a word.  I hate them.  It all goes back to my childhood when I would spend an occasional Friday night at my grandparents' house, staying with my aunt who was only four years old than I was.  Aunt Becky had a four-poster double bed and had a sock monkey doll.  The thing had wires in it's arms, and Becky had it wrapped around a bedpost at the bottom of the bed.  It stared at me all night long with those beady eyes and that stupid big red mouth.  Since that was about 50 years ago, I'd like to tell you that I've grown up and gotten over it, but I can't.  I still hate them.  It's not like I go screaming from the room or anything.  They just give me the creeps.

At the Mercy Center, our sleeping rooms are on the second floor and our sewing room is on the first.  We have to walk through the chapel to get from one to the other.  Three years ago, as I was going through the very dimly-lit chapel on my way to my room to change into jammies about 11pm, I got the creepiest feeling I've ever had in my life.  In England and Scotland, I would go to every dungeon in every castle just to "feel" something.  Got nothing.  Seeing or feeling a ghost has been my fondest wish for 50 years, but I'm about as psychic as a block of wood.  Except in this chapel.  I had the most intense feeling of dread that someone was not only watching me, but was going to jump out and kill me.  I've never been so scared in my life.  As soon as I got into the hallway, the feeling stopped.  Went up, put jammies on, but now, I had to go back through the chapel to get to the sewing room.  It was only 11:15!  I still had three more hours of sewing in me.  I felt like an idiot calling someone in the sewing room to come and escort me through a church, so I sucked it up and ran through.  The feeling was gone and nobody killed me.  When I related my tale to the group, one of the more religious members said that was God telling me to come back to the church.  I told her God has a very sick sense of humor, and that wasn't God.

So I've been to three retreats since then and no more eerie feeling.  However, the guy that runs the kitchen said he often hears a person whistling when he comes in early in the morning, and he's the only person there.

Anyway, when I got to the center Monday, I went directly to the sewing room with all my crap.  When I wanted to put jammies on later, my clothes bag would be down there, I could change in the bathroom, and not have to make two trips through the dreaded chapel.  So, when I did go up about 1am to go to bed, Darlene went too.  We were the last two and closed the room up.  I put my bag down in my room and went in the bathroom and stopped with a sharp inhale, and backed out.  There was a dark shape on the toilet!  I couldn't find the light switch reaching my hand around the corner!  It wasn't there!!!  It was on the bedroom wall!  HOLY CRAP!!!  Scared the shit out of me!!!  There sat the biggest damn sock monkey I've ever seen!!!

Knowing Darlene wouldn't be in bed, yet, I tapped on her door and asked her if she knew about this!  She claimed ignorance but came in my room expecting to see a bug or spider.  Not even close.  Nobody told her anything, because they knew we were good friends and she'd tell me. 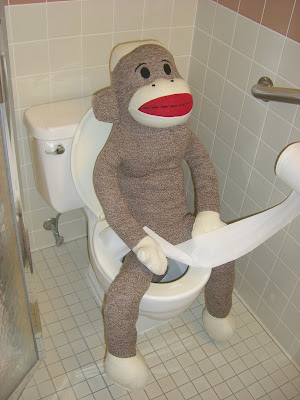 Nobody enjoys a good joke more than I do, so once again, I sucked it up, touched the damn thing, and put Morty to bed. 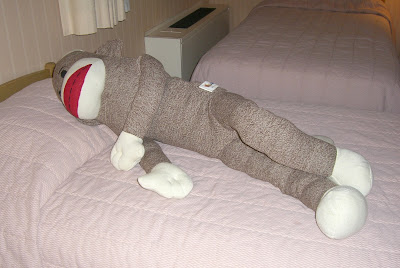 At least he wasn't staring at me all night with those beady eyes. 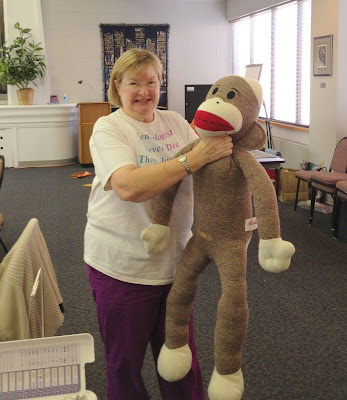 The next morning, I took him down to the sewing room.  Going with my first instinct, I'm letting out years of pent up hatred for sock monkey's everywhere by strangling him.

Morty pleaded with me for his life.  He'd do anything.  He'd even do some of my sewing so I could have a break.

Well, this could work. 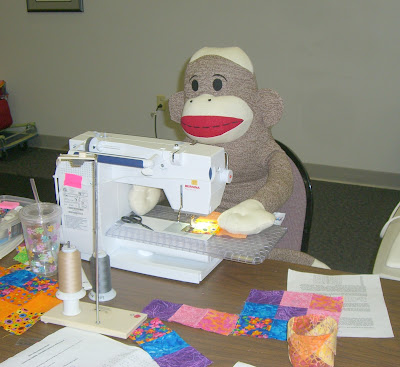 He needs practice on his quarter inch seam, but he wasn't too bad. 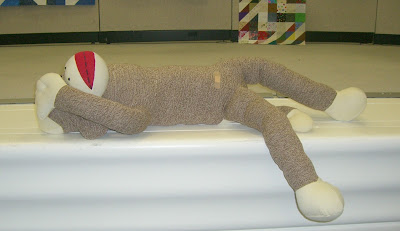 Then he got a backache from sewing and had to lay down on the stage and rest.  Being a foster mom, I know how important it is to spay and neuter, so while Morty was sleeping, I neutered him and put a bandaid on his tummy. 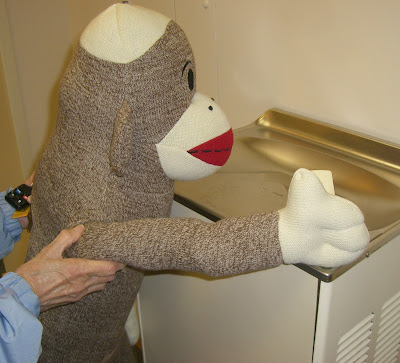 When he woke up, he was thirsty. 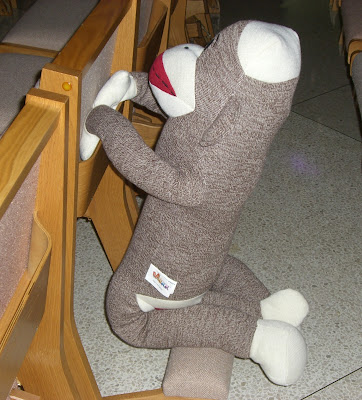 Coming back from lunch (also through the dreaded chapel) Morty wanted to stop and give thanks that I didn't throw his butt out my second story window the night before. 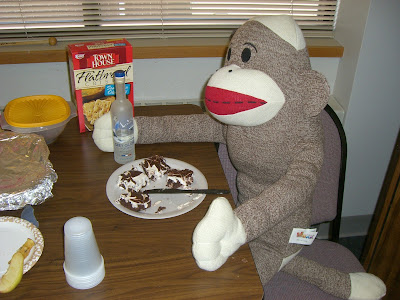 After dinner, Morty was ready for something a little sweet, and had some of Darlene's brownies and a wee sip of vodka to ease the pain from his neuter. 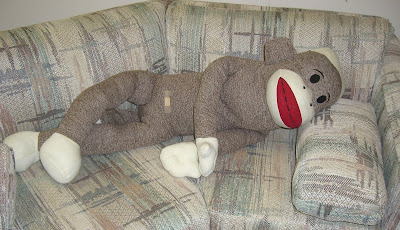 Morty had a little too much to drink and had to take another nap.  A little better look at his bandaid.

Everyone wanted to know what I was going to do with Morty when we got home.  Ha.  Not going to happen.

As pieces of the story came out, Jeanne found Morty at Walgreens and put him in my room.  Since I hadn't been in it at all the first day and evening, the door was open.  Everyone was very disappointed with me.  Poor Morty sat on my toilet for hours and hours waiting for me and no one got to be there when I found him.  Gee, I'm so sorry to disappoint you all - NOT.  Now, I have a whole year to plot my revenge.  They'll never see it coming.  And Morty went home with Jeanne.  Nice job, Jeanne.  You really got me this time.

And Jan swears she didn't have anything to do with it and had a legitimate alibi.  If she had done it, the monkey would have had a complete wardrobe of clothes.  That's true.  Last year, Jan gave us all a fabric "paper doll", like a gingerbread man shape, and told us to dress it like ourselves and we'd vote on who did the best job.  We all had a lot of fun with that one.  Mine had a red t-shirt, jeans, tennis shoes, blond hair and a small cat.  I brushed a cat and used a glue stick to put cat hair and threads all over Little Barb.  Jan's doll had a box and about five changes of clothes!  Then, somebody kidnapped Little Barb from the table and held her for hours in a dark, scary box until mama correctly guessed who kidnapped her.  It didn't take long for me to figure out it was Jan.  She kept asking if I'd figured it out, yet.  And whispering to her neighbor, Rita.  So obvious to someone who watches every police procedural show on TV.

Morty didn't creep me out as much as I thought, so I guess I have Jeanne to thank for that.  But, I still wasn't taking him home.