My babies will be three months old on the 16th!  I can't believe it.  I still tend to think of them as tiny babies, but they've been ready for adoption for almost two weeks, and one, Pierce, has been adopted.  They're allowed out in the house when I'm home, but are in the bedroom at night.

Nita is the spunky one.  She loves to play with Ember, and they wrestle, chase, and wrestle some more.  She's also very sweet, as are the others.  All three sleep with me and keep warm under the covers.  I  never know which one is going to stick their head out in the morning and lay their head on my arm.

Cary is the cuddliest and the first one under the covers.  He's just adorable.


Ember loves to play with Nita.  They're all learning to play with the general population and are having a ball running around two floors of the house, climbing cat trees, furniture, and stairs.

Pierce's new mom sent me pictures of him and his other new brother and sister.  Betsy has two shih tzus and wondered how Pierce would get along with them.  I thought they'd be fine since kittens usually get along with anybody and anything, but you never know.  Cricket, the female, has adopted Pierce as her own and licks him from one end to the other.  Oscar, the male, isn't quite as fond of him, but is warming up.  This is such a great photo.  Thanks, Betsy.  It's so reassuring to know your babies are in a good home and getting along with everyone. 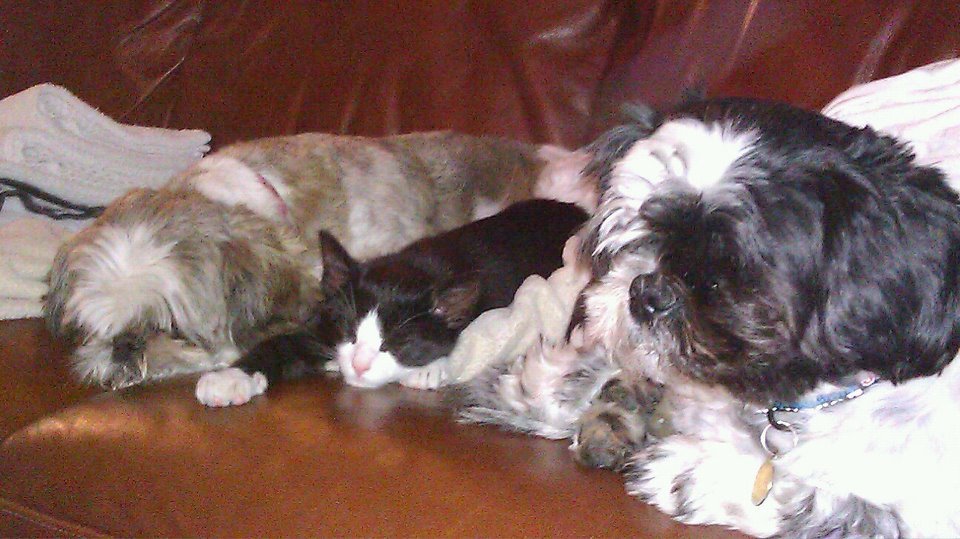